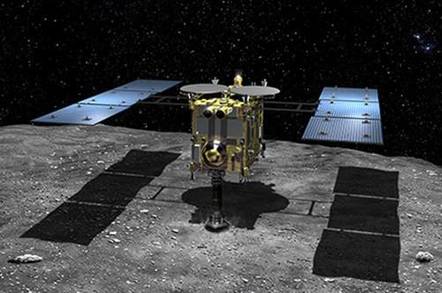 Japan's Hayabusa2 probe returned to its home position above the asteroid Ryugu today after conducting a second touch-and-go operation.

The objective was to collect some pristine rock and dust from Ryugu following a thumping with Hayabusa's explosive impactor earlier this year. The first touch-and-go landing occurred back in February.

Touchdown occurred early yesterday morning, as the spacecraft made a careful descent with its sampling horn extended once again, reaching the surface at 10:06 JST before heading back to safety some 20km away.

[PPTD] Today (July 12), Hayabusa2 returned to the home position as scheduled. During this second touchdown operation (PPTD), we received a huge amount of support from so many people. Thanks to you, we were able to carry out the PPTD operation safely. Thank you very much! pic.twitter.com/6Sy8coM8D5

The successful sampling should be the final one made by the probe and marks the end of this portion of the mission. The sample container will eventually be returned to Earth for analysis by scientists.

The sampler itself works by forcing debris to rise from the surface of Ryugu by firing a small projectile into the asteroid. Judging by the before and after pictures on JAXA's Twitter feed, the procedure was a complete success as bits of asteroid can be seen floating about as the probe left the surface.

Hayabusa2 will finally depart the asteroid for Earth at the end of this year, arriving at the end of 2020. A re-entry capsule containing the hard-won fragments will then deliver the cargo through the Earth's atmosphere.

Japan's brilliant boffinry is not the only asteroid sampling game in town. NASA's OSIRIS-REx, launched in 2016, is currently skimming the surface of asteroid Bennu in preparation for a crack at retrieving its own samples.

Rather than firing stuff at the asteroid, OSIRIS-REx has a sampling arm, which will make contact with the surface and release a burst of nitrogen gas to stir things up. Three attempts are possible to collect anywhere from 60 to 2,000 grams of material.