We have the best trade wars: US investigating French tech tax plan over fears it unfairly targets American biz

How dare they. There are shareholders to consider 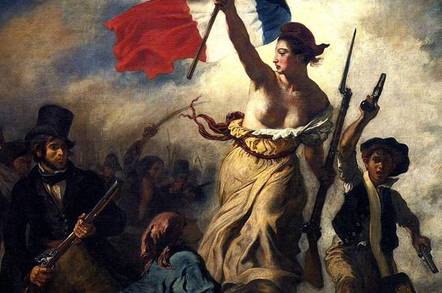 The US has declared that it is investigating French plans to impose a 3 per cent tax on tech firms' top line, not the bottom.

"The United States is very concerned that the digital services tax which is expected to pass the French Senate tomorrow unfairly targets American companies," said US trade representative Robert Lighthizer.

"The President has directed that we investigate the effects of this legislation and determine whether it is discriminatory or unreasonable and burdens or restricts United States commerce."

That commerce is data, and lots of it. The EU is getting increasingly annoyed at tax avoidance and France has made the first move. The proposed GAFA [PDF] (Google, Apple, Facebook and Amazon) law would be a revenue, not profit, tax.

The new law would levy 3 per cent of "targeted online advertising, sales of user data for advertising purposes and online intermediation platforms", and France reckons it can earn €500m a year from the policy. Small businesses are safe – you need to earn €750m, or €25m in France, to be affected.

Over the last decade or so corporations around the world have become very good at avoiding tax, with the tech sector proving particularly adept.

The (perfectly legal) gig is this. You set up headquarters in a low-tax country – looking at you Ireland and the Netherlands – then licence your product out to other EU countries at very high cost so that you barely make a profit.

It's a technique pioneered in Hollywood, where films are taxed on profits. David Prowse, the body of Darth Vader for the original trilogy, opted for a profit payment rather than an upfront deal and so earned very little for Return of the Jedi, which has still to make a profit despite a $32m budget and earning mega-millions.

Tech firms got the message and we're left with the absurd situation that the company effectively owned by the world's richest man hasn't paid taxes in its home country for a couple of years. And it's not alone. Yes, we are referring to Amazon for the absence of doubt.

The French proposal is fairly simple; if our citizens are spending their money with you then we get to take a cut to pay the costs to look after them. Seems fair enough really, but firms used to paying the bare minimum in taxes don't see it that way. After all, as U2's The Edge (aka David Evans) put it in rock 'n' roll terms: "Who doesn't want to be tax-efficient?"

France has said it will abolish the law if an international solution can be worked out. That seems unlikely. The EU has been working on this issue for some time and still hasn't got the member states to agree, and the prospect of a global agreement seems slim.

A lot depends on how the US reacts. If it goes in hard with sanctions that really bite then other countries might be dissuaded from similar actions. And one thing the Trump administration has proven adept at is starting trade wars.

Certainly tariffs from the US would hurt some sections of French industry. The principle export to the US is aircraft and US manufacturers would be more than happy to get a slice of that pie if Gallic kit becomes more expensive to buy – although existing aircraft would still have to be maintained.

France also exports a certain amount of heavy equipment, particularly in the power sector, and that too could be hurt. But France's other great export market, beverages, would suffer less. Let's face it, if you're buying proper Champagne, Cointreau or Courvoisier, price isn't so much of an issue.

There's also the backlash from other countries if the US is seen to be throwing its weight around over what is a slightly dodgy argument. Governments are usually cash-strapped and the revenues such a tax could pull in would be tempting for many.

The UK intends to introduce a new Digital Services Tax under the Finance Bill legislation, a draft of which was published yesterday. The new tax would apply a 2 per cent charge on revenues reported by search giants, social media outfits and online marketplaces that turn over £500m globally and generate revenue of £25m by providing services to customers in Britain.

Giles Derrington, associate director of policy at TechUK, an industry body comprised mostly of SMEs members but which also includes Google UK and Amazon Web Services, was clearly upset by the proposals.

"As a revenue tax targeted on a narrowly defined set of companies, the Digital Services Tax is not one of those smart measures. It risks making investing in the UK less attractive, increasing costs for consumers and will likely hinder progress towards a long term global solution."

He pointed to the ire in the US caused by France's proposals. "The US government has said that this proposal risks creating new non-tariff barriers to trade, and there is a real risk that the government is putting the UK at risk of retaliation from the US government that would hurt British businesses and consumers."

So there it is. Quelle surprise?

There is a real sense that many countries are getting increasingly sick of the kind of Silicon Valley accounting tricks that the tech titans are using to get out of paying their fair share. Their populaces certainly are – if the average person on the street tried these kinds of shenanigans they'd end up in so much trouble with tax authorities they'd be cavity searched for their last sou, pound or dollar. ®