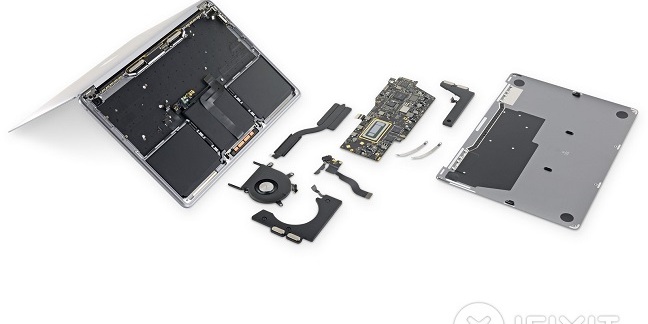 Apple doesn't think you need function keys in its two-port 13" MacBook Pro. But the delight of the butterfly keyboard continues to linger like a noxious emission in an elevator.

Repair specialists iFixit had a look at Apple's latest and not-really-greatest laptop armed with the usual array of spudgers, suction cups and screwdrivers to find that it's about as hard to fix as the last model.

The swap of function keys for Touch Bar aside, it's pretty much business as usual externally. Those two USB-C ports (one of which will be snaffled for charging) still seem unnecessarily stingy for a laptop with both a Pro after its name and typical Apple pricing, but at least there's a headphone jack.

The guts have, of course, seen an update, with an eighth-generation quad-core i5 puttering along at 1.4GHz (Turbo Boost to 3.9GHz) to keep things ticking over, backed by Intel Iris Plus Graphics 645.

The iFixit gang made light work of removing the underside to reveal a 58.2Wh battery, up from the 54.5Wh of the previous model and even the 58Wh of its pricier 13" stablemate.

No fire extinguisher is included.

Digging further revealed a trimmed heat pipe to make way for the Touch ID sensor – a worry, considering the cooling problems suffered by some devices. Going further, the team discovered that the last of the upgradeable MacBook Pro components has gone – no more switching SSDs for you, sunshine.

That aside, it appears that fixing some elements might be easier. The speaker module is held in place with screws, the Thunderbolt connectors are on a breakout board and so can be replaced without swapping out the entire logic PCB, and the headphone jack, mic and Touch ID connector are similarly replaceable.

It's almost as if Apple took a look at what users might break and made them repairable. Except for that keyboard, of course...

The logic board itself is a mass of soldered silicon, sadly par for the course. RAM and CPU obviously cannot be upgraded without a fresh board and that Apple T2 co-processor is now present and correct.

And the keyboard? Well, we like to imagine that as Jony Ive departed Apple HQ, Tim Cook whispered to a nearby engineer: "So, NOW can we fix the damn keyboard?" But it seems the latest attempt to stop the keyboards failing (also seen in the MacBook Pro refresh in May) will be around a while yet.

Overall, the iFixit team rates the entry-level 13" MacBook Pro a woeful two out of 10 for repairability, citing the loss of a swappable SSD, soldered RAM and a glued-in battery for unchanged score.

Still, at least the retaining of the keyboard will continue to give writers an excuse for typppos. ®