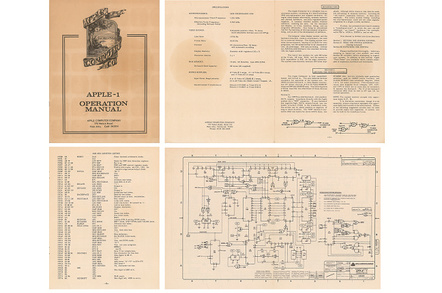 If you needed a manual for your Apple-1, you've missed your chance. Some other well-heeled fanboi is 12 pages richer and nearly $13k poorer.

The booklet was originally expected to go for $10k but such is the determination of Apple fans to spend money on the company's products, the dozen pages of Woz-wisdom actually went for $12,956, about two iPhone power cables short of the magic $13k.

The winning bidder is now the proud owner of what Boston-based RR Auctions reckons is one of 65 surviving guides to Apple's $666.66 computer. The surviving Steve, Wozniak, made around 200 or so of the things back in 1976. A working example of the breed went for $375,000 last year.

The manual features instructions on setting up the computer, includes a fold-out schematic of the Apple-1 and has a page headed "6502 Hex Monitor Listing" for the famous Woz Monitor. PDF versions of the pricey paperwork can be easily found on the World Wide Web using the search engine of your choice.

As well as letters from Benjamin Franklin and George Washington, the auction was chock full of curios. For the cost of just over four Apple-1 manuals you could have had one of Princess Diana's gym sweatshirts. The garment, which "has never been washed", was sold by the fragrant People's Princess's personal trainer to raise cash for a Malawian family based in South Africa.

The Virgin Atlantic sweatshirt, given to Diana by the Bearded Wonder himself, Richard Branson, sold for $53,532 and included a signed note from the Princess.

Still, there remains time to snap up one of Winston Churchill's cigars, which has yet to reach its estimate of $7,500, or the Emporio Armani shades, replete with signed case, of U2 frontman Bono.

The latter has breezed past its $1,500 estimate, something that will doubtless bring a tear to the eye of the tireless campaigner, philanthropist and creator of audio spam inflicted on unsuspecting Apple users. ®

Apple co-founder: It's Gov vs The People if FCC doesn't act

If only that other Steve would ask