Oh no, Twitter's gone down. How can we get the word out? Ah yeah, that's right. We have a website that works 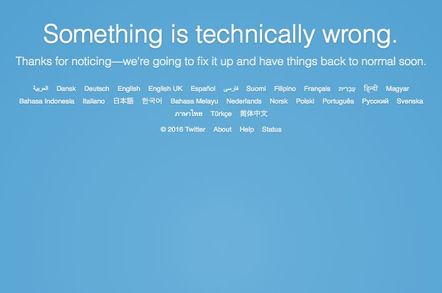 Updated Twitter.com is down worldwide along with its mobile and tablet apps. Yes, we know this must be a difficult time for you all.

The antisocial network, which is frequented by about 326 million users a month, fell offline about 45 minutes ago at time of publication.

By worldwide, we mean at least in North and South America, Europe and the UK, and Japan, judging by Downdetector.com. Twitter's APIs are also suffering.

People can't tweet, read tweets, retweet, or do pretty much anything on the microblogging maelstrom. Opening the site in a browser presents the usual error message: "Something is technically wrong. Thanks for noticing—we're going to fix it up and have things back to normal soon."

Maybe it's for the best. Perhaps the world could do with a little Twitter break to calm down, get some perspective, take a deep breath, breathe out slowly, and enjoy the digital silence. We'd add something like put away your phone, or close your laptop, but hey, there's, like, a load of Reg articles you might want to read, cough.

"We are currently investigating issues people are having accessing Twitter," a spokesperson for the San Francisco-based biz told us. Keep your eyes peeled on this status page for more updates.

Earlier today, Reddit's desktop site also fell over for a while, we note. ®

Well, it appears Twitter's back online, though it hasn't updated its status page yet.