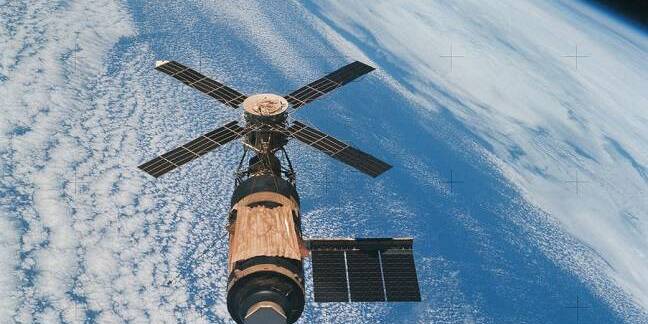 40 years ago today, nearly 10 years after Neil Armstrong plonked a boot on the Moon, another bit of Apollo leftovers came screaming back to Earth: the Skylab space station.

Launched in May 1973 aboard the last Saturn V to fly, Skylab consisted of the Saturn S-IVB 212 stage outfitted to be home to visiting crews. Three crews stayed in 1973 and 1974, conducting solar observations, fixing issues and dealing with the challenges of long-duration spaceflight. A fourth visit was also planned, but never flew.

The final crew, commanded by Gerald Carr, nudged the station into an orbit of between 433 and 455km (269 to 283 miles) using the Apollo CSM thrusters before returning to Earth and leaving Skylab to its own devices.

As is customary for the US Space Program, a follow-up to the space station was cancelled (and later converted to Skylab 1 spec with a hole cut in the side for display in a museum.) NASA was, after all, focused on getting the Space Shuttle flying, and back in 1974 boffins reckoned the station had nine years before the agency needed to worry about dealing with it.

The rapid retreat from Apollo meant that NASA soon lost the ability to revisit Skylab even if it had the budget to do so, and engineers began laying out plans to send the Shuttle to rendezvous with the station and send it to a higher orbit. Potential reuse was on the cards, as officials eyed the succession of Salyuts launched by the Soviets with envy and concern.

First, however, Skylab needed to be stabilised. Ironically for a station with a mission to study the sun, our local star turned out to be more active than predicted, causing the Earth's atmosphere to expand and drag on the workshop to increase faster than expected. Indeed Skylab's own measurements proved handy in calculating just how much more active things had got.

The result was that Skylab would be coming down far sooner than expected. Hopes to send up a Space Shuttle equipped with a propulsion module to attach to a Skylab docking port were dashed as NASA's reusable space truck continued to suffer delay after delay.

After an uncrewed Russian spacecraft tumbled back to the Earth after experiencing a failure in 1978, thoughts turned to the giant derelict space station still toiling around the planet. A swift recalculation showed that Skylab would dip below 278km (173 miles) by the end of 1979. Not ideal, and a good deal earlier than expected.

Hurrah for Apollo 9: It has been 50 years since 'nauts first took a Lunar Module out for a spin

While Skylab lacked the ability to reboost itself, its attitude could be adjusted if controllers were able to regain communications with the abandoned station. Contacting the thing was problematic enough, since the workshop was tumbling in orbit and its solar panels not charging the batteries.

Nevertheless, the gang did indeed reactivate Skylab to a certain extent, firing up control movement gyros (CMG) and attitude thrusters to stabilize the station in the hope of extending its orbital life by adopting a less drag-heavy attitude.

The Death of a Space Station

Skylab's fate was finally sealed at the end of 1978. Managers finally faced the fact that the Shuttle's first flight would slip into the next decade as the workshop's orbit continued to decay faster than expected.

The last days of America's first space station would be all about trying to control the re-entry.

By early July 1979, it was becoming harder to maintain the attitude of the stricken station and controllers took the decision to put Skylab into a tumble in the hope of dumping the wreckage away from populated areas.

Alas, the station had one final surprise for mission controllers. The team had expected the complex to come apart as it entered, but radar operators reported only a single image. The expected impact area of the more resilient bits of the station would now be in Australia.

NORAD reckoned that impact occurred at around 1637 UTC on 11 July 1979. Locals in the area south-east of Perth, Australia reported sonic booms and impressive visuals as Skylab arrived in the early hours.

Rumours that waste tanks, full to the brim with astro-pee, survived to be found by locals are, of course, entirely untrue. As is speculation that this payload was the origin of at least one popular brand of Australian lager.

Nobody was injured by the shower of space station parts.

Some pieces of debris were shipped back to the US for analysis and subsequent display in museums. Others remained in Australia. The small Esperance Municipal Museum proudly shows a model of Skylab in its grounds and the wreckage collected by citizens is displayed within, including an oxygen tank, freezer and a hatch.

While NASA continues to prepare for the 50th anniversary of the Apollo 11 landing, it is also worth noting that that it is also the 40th anniversary of its engineers regaining control of a 77,000 kg (169,756lb) derelict space station and successfully sending it back to Earth without injuring a soul.