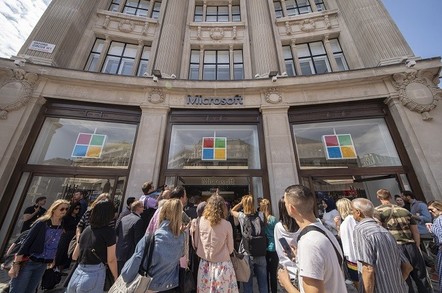 Looking through the windows at Windows (pic: Microsoft)

Microsoft finally opened the doors on its flagship store at London shopping mecca Oxford Circus today, leaving all but the most breathless fanboys wondering what exactly the company had spent the last few years actually doing.

The shop is the company's first physical retail store in the UK and covers an antiTARDIS-like 22,000 square feet over three floors. It feels quite a bit smaller on the inside than the exterior would suggest.

We emerged blinking into the sunlight from Vulture Central in London and headed to the store as it opened to the public this morning. It is helpfully located in front of an exit from the Oxford Circus underground station (so travellers on public transport will get a chance to play exit roulette in order to pick the right one). Reg readers, because you deserve to know, it is exit 3 – aka the "Apple Store exit". Ahem.

In spite of some hopeful barriers to keep the crowds at bay, we'd describe the place as "a bit busy" rather than "heaving with fanboys" by the time we arrived shortly after opening.

The ground floor is occupied by a McLaren Senna sportscar, which excited Xbox fans can pretend to drive while playing Forza on a big screen. It makes for a fun window display, but little else. The rest of the space is spattered with Surface devices, from the diminutive Go to the flagship Studio with the walls festooned with huge screens to let customers know just how fabulous Microsoft is.

The problem is that the store doesn't actually go back very far and one is quickly aware that one is very much in a shop, er, "retail experience", built to fit around a corner.

We took the swooping central staircase to the next floor and found an array of gaming laptops from third parties and a vast array of Xbox gear. A good third or more of the floor space is given over to gaming, seeing as that is pretty much the only consumer play Microsoft has nowadays.

VR devotees will be saddened to find none of the idiot visors on show, although Microsoft will show off the HoloLens if you ask nicely.

A small corner of the first floor is devoted to Microsoft's real cash-cow, Office. The company would probably prefer you not to ask how well the Xbox is selling versus arch-rival Sony's PlayStation.

And there is also Microsoft's take on Apple's Genius Bar: the Answer Desk.

The Answer Desk is where some of the 150 "Store Associates" (or maybe Windows, er, Workers? Wizards? Something else beginning with W?) will assist customers with setting up their purchases and dispense technical support. There is also a Gaming Lounge and a small Community Theatre (set up like a classroom while we were there).

The top floor will normally be used as a presentation, training and demo area for enterprises, although for the purposes of the launch had yet more Xbox paraphernalia laid out, as well a demonstration of Microsoft's upcoming xCloud. The gang also had a Carlsberg beer bar set up in order to show off the brewer's "digital transformation" using Microsoft's cloudy tech. Alas, the staff could only say "Yeah, it's Azure IoT, right?" but had no idea what hardware had actually been used.

As for the beer, apparently it is not allowed to flow while the store is open. There's a metaphor hiding in there somewhere.

The top floor also showed off some of the pleasingly original ceiling features of the building, uncovered during renovation works. The rest of the outlet was, alas, somewhat soulless and smelt vaguely of sweat and IKEA despite the Liberty-themed Surface covers on the shelves.

The company also announced that it would be flinging £1m at three charities: UK Youth, Raspberry Pi Foundation and The London Community Foundation. Microsoft wouldn't tell us how the cash would be divided, but Philip Colligan, chief exec of the Raspberry Pi Foundation, told us their slice of the pie "will be used to support the growth of Code Club and CoderDojo across the UK".

It's a shame Microsoft did not pop into rival Apple's store, a few metres away, for ideas. The fruity firm's retail outlet has more depth and a considerably higher ceiling, making for a pleasant place to be (although we're not sure about the trees, despite a member of staff insisting that they "brought the outside in").

Microsoft's, on the other hand, feels shallow and a little claustrophobic. Having ditched much of its consumer lines over recent years, it's a little difficult to see who this store truly is for. Unless Xbox is your thing or you fancy a look at Surface devices not on show in neighbouring John Lewis, you'd be forgiven for passing it by.

While this vulture attempted to take a photo of the exterior, a passerby was overheard saying to a fellow pavement plodder: "Oh hey – is this Microsoft trying to be cool? Want to go to the Apple Store?"

And that, in a nutshell, is the problem. ®