George Orwell's got nothing on this lot with doublespeak 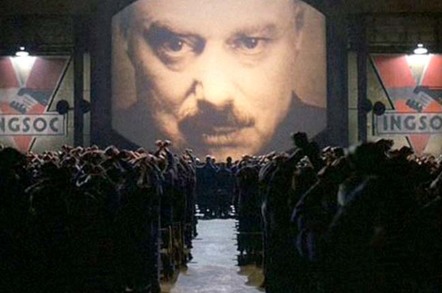 Analysis America's communications watchdog, the FCC, has come good on its promise to boost broadband adoption through competition by… blocking a law that ensures broadband competition.

This week, the federal regulator's triumvirate of Republican commissioners, led by the chairman Ajit Pai, actively voted down a city ordinance specifically designed to make sure that people living in apartment blocks have access to a range of ISPs.

And then, for good measure, they put out a news release titled: "FCC takes action to promote broadband deployment and competition in apartment and office buildings." George Orwell would be proud.

Like most heavily built-up cities, a significant proportion of San Francisco residents live in apartment buildings. As part of their nationwide policy of creating local monopolies, cable companies have often struck exclusive deals with building owners to supply only their internet services, resulting in lower competition and higher prices.

And so the City of San Francisco stepped in and approved the measure to force greater competition by obliging owners to provide access to the wiring in their buildings to any ISP that wants to offer their services.

This approach has proved successful, according to San Francisco mayor London Breed. "San Francisco adopted Article 52 because it is uneconomic and, in the case of many older buildings, impossible, for multiple carriers to install their own wiring to reach each occupant," she wrote in a letter to Leader of the House Nancy Pelosi after hearing that the FCC intended to target the law after a blog post by FCC chair Ajit Pai.

"Rather than fostering competition, the proposed order would strip occupants of many (multi-tenant environments) in San Francisco of a meaningful choice of communications providers," Breed warned.

But, according to Pai and fellow commissioners Michael O'Rielly and Brendan Carr, the ordinance actually does the opposite. "To provide service, broadband providers must have access to potential customers in the building," Pai argued. "But when they know that they will have to share the communications facilities that they install with their competitors, they’re less likely to make the effort in the first place."

In other words, rather than address the reality of internet access right now, Pai has decided that in a possible future the ordinance could reduce the provision of broadband access – presumably new fiber lines - and so has decided to undercut an existing provision that works.

Not only is that an odd decision but it doesn't reflect future reality either: internet access experts have noted that, particularly in big cities, the majority of apartment buildings have their cabling provided by the developer as part of its construction, or the cabling is paid for by the building owner when they renovate.

Pai's argument is built on the concept that it will be cable companies like AT&T and Comcast that will pay for the cabling up to and inside buildings and requiring them to then open it up to competitors will reduce the incentive for doing so in the first place.

But that simply isn't the reality in cities like San Francisco. And not only that, but Pai ignores the obvious counterpoint to his argument: he would massively increase the cost of broadband competition to apartment blocks by requiring every potential supplier to install their own wiring.

Nevertheless, the FCC decided that America's broadband provision needs a one-size-fits-all policy approach, despite the reality on the ground.

This is not the first time the FCC has decided, against all the evidence, that there is no difference between Los Angeles, California and Boise, Idaho. Earlier this year it passed a measure that imposed a flat fee that cities could charge mobile operators for the installation of 5G mobile phone transmitters, despite the fact that some parts of the country have more valuable real estate, and despite deals that had already been struck. That decision was bitterly opposed by cities across America and is currently being reviewed by an appeals court.

San Francisco mayor Breed also complained that Pai was actively ignoring language in the ordinance itself when he argued that "the forced sharing of in-use facilities… encourages providers to free ride on existing infrastructure rather than building their own." In fact, Breed noted, the ordinance says that "a property owner is entitled to just and reasonable compensation from a communications services provider." There is no "free ride," Breed noted.

In justifying the decision, Pai adopted a Trumpian up-is-down muddying of the waters and argued in his statement that "the City of San Francisco has failed to mount any defense whatsoever of requiring the sharing of in-use wiring."

This kind of approach – creating a strawman and then making false claims about what they did and didn't say in order to confuse the issue and prevent clear and objective analysis – is all too familiar in social media argument but its arrival in official government telecoms policy is depressing to say the least.

Aside from London Breed, Nancy Pelosi – who called the decision "deeply misguided" - and Representative Katie Porter (D-CA) who has introduced a budget amendment that would prevent the commission from finalizing the rule – the decision has also been slammed by FCC Commissioner Jessica Rosenworcel.

"This is crazy," she said in her formal dissent. "There is so much that is wrong with this decision. For starters, Americans don’t take kindly to Washington telling them what they can or cannot build in their own backyard or in their own buildings."

"Second, it is not clear this agency even understands the San Francisco law it seeks to preempt… Why are we preempting an imaginary possibility in a city ordinance in San Francisco? Third, instead of worrying ourselves with the hypothetical, we should be taking action. We should be finding ways to increase broadband competition… Yet the best this agency can do is throw itself in front of a municipal effort to try and increase competition for consumers?"

Unfortunately, as has happened repeatedly with the FCC under Ajit Pai, the only rationale explanation for the decision is that he continues to serve the very companies that the FCC is supposed to oversee. By removing the San Francisco ordinance, the FCC is actively protecting their business model. A second, related vote by the FCC made it plain that it would strike down any similar measure adopted across America that would oblige the sharing of wires.

The cable industry's entire business model is built around the ability to build and maintain local monopolies. Countless studies have revealed that the US suffers from a devastating lack of real competition when compared to every other modern economy. The result is slower internet speeds and higher prices.

This week's decision by the FCC is so transparently flawed and so obviously skewed in favor of oligopolistic cable giants that it makes a mockery, again, of the entire policy process. ®