Just when you thought things couldn't get more intrusive 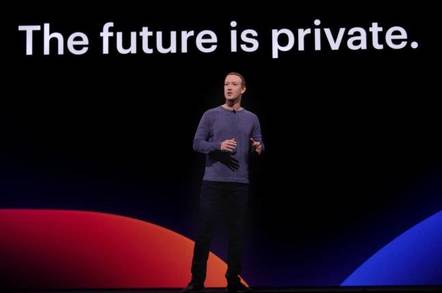 Updated Facebook, whose CEO in April declared, "The future is private," has applied to patent a system of coordinated finger-affixed cameras that allow wearers to live stream a panoramic view of their surroundings.

Yes, you give Zuckerberg the finger, and he'll stick some kind of spy tracker on it. It was ever thus.

The patent application for "wearable cameras" was filed in January 8, 2018, and published by the US Patent and Trademark Office on Thursday. It may or may not be granted, depending upon how the idea is seen by patent examiners.

Companies file patent applications all the time that never turn into actual products or services; but the expansive data gathering contemplated by this research makes it difficult to reconcile with the private future foretold by Mark Zuckerberg.

Facebook's engineers describe their work as "a hand-worn video camera" that's "integrated into a network environment" such that "its video-capture contents may be stitched together with other videos" so they can be "shared across an online social network."

And not just one hand-worn video camera, but several, either strapped into fingers or embedded in accessories like rings. The temporally synchronized video streams flowing from these lenses then get stitched together or presented separately, potentially coordinated by a mobile phone. 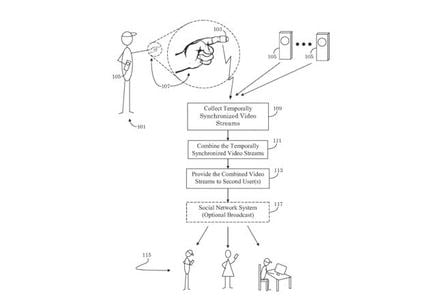 To control its hand-cams, Facebook engineers propose using gestures and movement patterns – a waving motion for camera activation or deactivation, a flicking motion to start recording, a wrist articulation to stop it, and a wrist rotation to broadcast live. And they even describe a hand motion that "causes an advertisement to be presented in the live broadcast." Raising a middle finger would be a perfect trigger in our view.

Feedback from these strap-on lenses could come in the form of haptics – vibrations, for example, to indicate a given command had been executed.

The patent application was filed before Facebook in March distributed a video of mass murder in Christchurch, New Zealand, prompting the social network to rethink its live broadcasting policies.

In a statement emailed to The Register after this story was filed, Facebook said, “Facebook employs a defensive patent strategy that leverages its robust portfolio. Rather than simply covering the technology practiced in Facebook’s products and services, most of its patents focus on future-looking technology. For these reasons and others, patents should never be taken as an indication of future plans; nor does Facebook comment on the specific coverage of its patents or its reasons for filing them.”