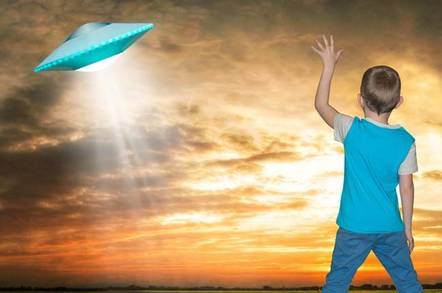 Even though your nan's on Facebook now posting "minions" memes, it's still the internet. And the internet is a big dumb place.

And it seems the antisocial network, despite its normcore outward appearance, is no less immune to stomach-churning tomfoolery than 4chan.

The "viral fake Facebook event" is by now a time-honoured tradition. Just cop a load of these events from 2015 and the guest lists they accumulate. Or here, where thousands of netizens thought they were hilarious too when they RSVP'd to a 2017 event titled "Catapult The Bean over Sears Tower".

So what dorky day trip have those wacky kids dreamed up now? Fatalities could be involved because their gaze has fallen on the United States' infamous top-secret military base, Area 51 in Nevada.

"Storm Area 51, They Can't Stop All of Us," the event's title promises. "We will all meet up at the Area 51 Alien Center tourist attraction and coordinate our entry," the description continues. "If we naruto run, we can move faster than their bullets. Let's see them aliens."

This is a "Naruto run", in case you were wondering, mainly the territory of anime fans who've not been outdoors for a spell.

Almost 300,000 people have said they will be attending the event, and another 300,000 have expressed an interest in doing so. Though the page has been up for weeks now, the numbers have forced a bemused mainstream media to once again attempt to wrap their heads around the internet's sense of humour.

The Daily Mail even had to point out to its minion-posting readership: "Most of the people who RSVP'd yes to the conspicuous event were likely joking."

The suicide pact is tipped to kick off at 03:00 PDT on 20 September, if you fancy joining in to catch a glimpse of ET.

Area 51, of course, is a hotbed of alien conspiracy theories dating back to the Roswell UFO madness of the '40s. Crackpots believe the downed spacecraft, dismissed as an army balloon, was taken to be examined at Area 51, where the military is also said to reverse-engineer alien tech, study extraterrestrial biology, host powwows with visitors from other worlds and muck about with weather control, among other things.

That the base is almost certainly connected to the development of experimental aircraft only fans the flames of conspiracy.

The heavily guarded borders of Area 51 are marked out by manifold signs and posts warning folk of the restricted area, and motion detectors will alert the "camo dudes" to unauthorised entry.

So it goes without saying that the Facebook event is an incredibly stupid idea. One woo-heavy website claims an intruder was shot dead by guards as recently as January.

It should also be noted that the event is hosted by the Facebook group "Shitposting cause im in shambles". Shitposting is defined by internet culture news site The Daily Dot as "aggressively, ironically, and trollishly poor quality" posting and the event page has predictably become little more than a place to "meme" on the topic rather than seriously discuss strategy.

Will hundreds of thousands of people turn up to take Area 51 by force? No, but you can bet that at least a slack handful will awkwardly shuffle about for an hour or two.

However, it's equally conceivable that the US military will be taking the risk seriously – because these things can get out of hand. Several years ago a Dutch teen's 16th birthday descended into chaos because the Facebook event she failed to set as private went viral. Thousands stormed the small town of Haren and the night ended in a riot as police attempted to defuse the situation.

A similar thing happened to an Australian teenager and a Mexican youngster too. So we really shouldn't underestimate the depths of Gen Z's nihilism. The Register looks forward to 20 September with keen interest. ®