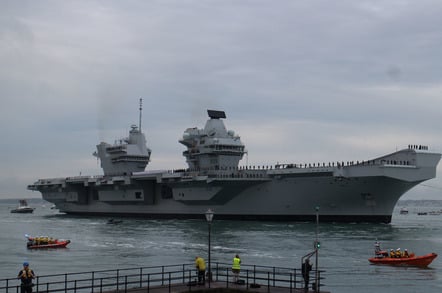 HMS Queen Elizabeth is back in Pompey harbour having sprung yet another leak.

Blighty's biggest ever warship and soon-to-be aircraft carrier was meant to be on five weeks of sea trials but that has been cut short.

An MoD spokeswoman told the BBC it was no more than "a minor issue with an internal system". The leak was contained within an internal compartment and pumped out before the ship returned to port.

It's not even the ship's first leak. Back in 2017, a faulty propeller shaft gland seal was letting in 200 litres of water an hour.

She also suffered the misfortune of losing a captain who was reprimanded for using the ship's company car for non-official duties, although some observers suggested the real scandal was that the official car for such a prestigious ship was a Ford bleeding Galaxy.

The 65,000-tonne, 4.5 acre aircraft carrier arrived in Portsmouth for the first time in August 2017. It is bereft of catapults or traps for launching or landing fixed-wing aircraft.

The £3.1bn Queen Elizabeth will eventually be kitted out with up to 40 F-35 Joint Strike Fighters, which have already had test flights from the ship. The F-35 jets are Short Takeoff and Vertical Landing aircraft. ®