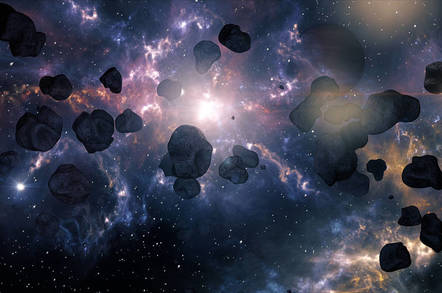 The newly discovered kilometre-sized asteroid dubbed 2019 LF6 has the shortest solar year around our Sun – compared to all the other space rocks found floating around the Solar System at just 151 days.

2019 LF6 belongs to a small group of space rocks classified as “Atira” asteroids, which orbit between the Earth and the Sun. Astronomers have only discovered 20 of these up to date.

A year on 2019 LF6 lasts just 151 days, that’s two weeks shorter than another Atira asteroid known as 2019 AQ3, which previously held the record for having the shortest year at 165 days.The lump of rock has another oddity too. It’s large, about a kilometre wide.

“You don't find kilometre-size asteroids very often these days," Quanzhi Ye, a postdoctoral scholar at the California Institute of Technology who was on the team that helped discover 2019 LF6, explained on Monday.

"Thirty years ago, people started organizing methodical asteroid searches, finding larger objects first, but now that most of them have been found, the bigger ones are rare birds. LF6 is very unusual both in orbit and in size—its unique orbit explains why such a large asteroid eluded several decades of careful searches."

At its most distant point from the Sun, 2019 LF6’s orbit flings it beyond Venus’ path and at its closest point, it’s reeled back in within Mercury’s orbit. The researchers from Caltech spotted it using the Zwicky Transient Facility (ZTF), a camera on the Samuel Oschin telescope at the Palomar Observatory in California.

The strange orbits of Atira asteroids makes them difficult to find even if they’re large. Ye said that the team could only search for them about 20 to 30 minutes before sunrise and after sunset.

Tom Prince, a physics professor at Caltech involved in spotting 2019 LF6, believed their short orbits were due to past skirmishes with the Solar System’s inner planets. "Both of the large Atira asteroids that were found by ZTF orbit well outside the plane of the solar system. This suggests that sometime in the past they were flung out of the plane of the solar system because they came too close to Venus or Mercury."

The team hopes to scout out more Altira asteroids in the future, possibly with NASA’s proposed space telescope NEOCam. The new mission aims to find near-earth objects so scientists can understand how asteroids were formed and how they will evolve over time as the Solar System changes. NEOCam will be equipped with an infrared telescope to pick up on the glow emitted by asteroids warmed by the Sun’s rays. ®