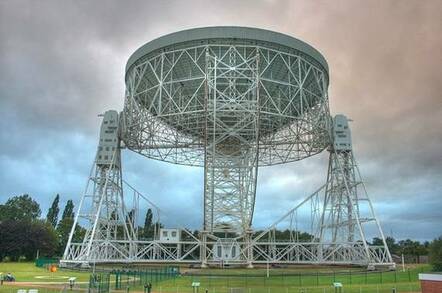 There was good news and bad news for UK space boffinry this weekend: Jodrell Bank Observatory was added to the UNESCO World Heritage List, while the more humble Dundee Satellite Receiving Station stood at the edge of oblivion.

For Cheshire-based Jodrell Bank, home of the famous Lovell Telescope, the award is recognition of the site's scientific achievements over the years.

The Lovell Telescope itself was built in 1957, just in time for the launch of Sputnik 1, and in 1966 received images sent via facsimile transmission from the Soviet Luna 9 lander. The resulting images of the Moon were infamously sent to the British press, much to the reported annoyance of the Soviet regime of the time.

The Lovell Telescope was the largest of its kind until 1973 and today still remains the third largest steerable radio telescope in the world.

As well as tracking the spacecraft of the early space race, Jodrell Bank has also been a pioneer in radio astronomy; it currently operates the UK's national e-MERLIN radio telescope and hosts the global headquarters of the Square Kilometre Array.

While politicos are busy patting themselves on the back at the award, it's worth remembering that just over 10 years ago, the UK government appeared likely to swing the axe on funding for the veteran facility as the future of e-MERLIN looked a bit dicey.

Thankfully, sanity prevailed and Jodrell Bank persevered, and in 2017 it added the Mark II Lovell telescope to the Grade 1 UK National Heritage List, affording it the highest form of protection.

Sir Bernard Lovell's 1957 creation was, of course, originally listed back in 1988, demonstrating that just being on a list isn't a guarantee that funding will keep flowing.

The Observatory was nominated for the UNESCO list in 2018 and, having been recognised, joined other UK sites including Kew Gardens as well as those farther afield, such as the Taj Mahal or The Great Wall Of China as "places of distinct cultural and natural significance for the development of human history", according to Matthew Lodge, minister and ambassador of United Kingdom of Great Britain and Northern Ireland to UNESCO.

NASA: You're shutting down what?

While the University of Manchester has since been awarded £12.1m from the National Lottery Heritage Fund and a further £4m from the Department for Culture, Media and Sport in 2018 for a new Discovery Centre at Jodrell Bank, the decommissioning of the Dundee Satellite Receiving Station looks set to kick off in the coming days – for want of a few hundred thousand pounds.

The Register has learned that "storage" following decommissioning could well mean "scrapping" for at least of some of the equipment of the Scottish satellite botherers, making a resurrection of the service tricky at best and impossible at worst.

The travails of the station have raised an eyebrow or two within the halls of NASA, an agency not unfamiliar with successfully operating kit that many might consider obsolete.

Dr Gene Feldman, an oceanographer at NASA's Goddard Space Flight Center, while not speaking for the agency itself, paid tribute to the station. In an email seen by The Register he said "the Dundee Station and its incredibly dedicated and skilled team was one of the most reliable, diligent and scientifically valuable receiving stations that NASA collaborated with", referring to the SeaWiFS mission that ran from 1997 to 2010.

He went on to say that Dundee Station's collection of nearly 10,000 high resolution SeaWiFS passes of satellite-borne sensors collating global ocean biological data "would not have been available by any other means."

He also highlighted the more recent contribution of the Dundee team in the commissioning of the SeaHawk cubesat, launched in December 2018. In May, after funding for the Dundee station had been cut and the closure announced, "they stepped in to help us successfully and quickly resolve a problem that we were having."

SeaHawk is based on a CubeSat bus provided by Clyde Space, which attempted to open negotiations with the University of Dundee to keep the Receiving Station funded.

Alas, those discussions appear to have stalled and the University remains determined to remove the facility from its premises unless someone comes up with the £338k funding that was cut by the Natural Environment Research Council (NERC).

Should this really be the end of the station, we'll leave the eulogy to our NASA scientist, who eloquently stated what seems obvious to all but those making the decisions:

Facilities such as this are not just a collection of hardware, antennas, cables and computers. Those things are easily procured. However, it is the skill, experience, understanding and more importantly, the philosophy and dedication to the job, the science and to service to the community that is irreplaceable and once lost, can never be restored.

Geek's Guide to Britain – now a book. Permission to geek out granted

Geek's Guide to Britain Brains that made Britain exposed, mapped and viewed