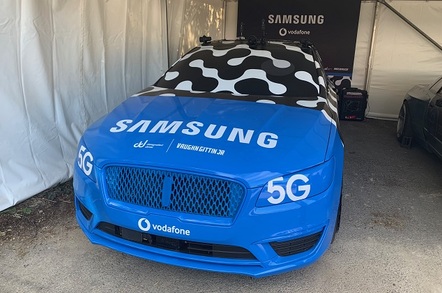 The 5G hype-wagon continued this week as Samsung sent a car up the UK's famous Goodwood Hillclimb that was being remotely controlled via a couple of Galaxy S10 handsets running on Vodafone's shiny new 5G network.

Or at least that little bit of 5G the telco managed to get up and running in the 3.8km circuit in the West Sussex countryside.

Huawei, which makes the gear running much of the country's 5G, was also in attendance with a "5G Truck", which called to mind the company's "5G Hotel". Lots of 5G branding on show, but much of the gear remained hooked up via Wi-Fi (although a representative did quietly show off a Mate20X replete with the usual impressive benchmark figures).

Samsung, on the other hand, strapped a Gear headset to Drift Champion Vaughn Gittin Jr and had him remotely pilot a Lincoln MKZ around the twists of the Hillclimb. The car itself had been tricked out by teleoperation outfit Designated Driver. Its VP of Engineering, Lucas Buckland, told The Register that the car had averaged 50mph on its run.

The current record-holder for the Hillclimb is former Formula One driver, Nick Heidfeld, who managed to avoid binning a McLaren MP4/13 while doing the deed in 41.6 seconds at an average speed of 100.4mph (~161kmph).

F1 cars are no longer permitted to have a crack at timed runs as nervous organisers focus more on spectacle.

Gittin will be putting on a tyre-smoking spectacle of his own today by drifting the remote-controlled car, dubbed the "S-Drone", around Goodwood's arena – having already tackled the Hillclimb.

Gittin, sat in the Festival's Future Lab, and wearing that Gear VR headset, has a set of controls familiar to racing game enthusiasts connected to the robotics within the S-Drone via a Samsung Galaxy S10 at each end, and the much-hyped 5G sitting in the middle.

As well as the usual velocity and engine speed indicators, there is also the all-important latency indicator. Latency is one of the improvements trumpeted for 5G, and keeping it in check is crucial in teleoperation for when, say, a pedestrian stumbles into the street.

Buckland also admitted to us that he would be sat in the passenger seat of the S-Drone, despite insisting that "nothing's going to go wrong" with the technology.

Having seen Gittin's antics behind the wheel, we'd suggest a sick-bag might be in order if the 5G connection stays up. ®