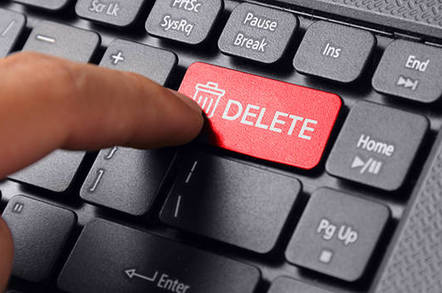 An interior design tools startup called Mosss on Wednesday sued Google to get it to restore its data after someone at the startup accidentally deleted the firm's G Suite account.

In a pro se lawsuit [PDF] filed in US District Court in Oakland, California, Mosss, under its previous corporate name, Musey Inc., asked Google to help it restore its data.

"Our Google G Suite account was accidentally deleted," the filing says. "Within an hour of thi [sic] happening, we contacted Google and explained our mistake and asked our G Suite Business account to be restored."

Initially, the filing says, the company believed Google would be able to help because a customer service representative said he'd deal with the issue. But the cavalry did not arrive.

"[W]hile clearly an urgent matter, to our dismay, our case was not escalated, and no action was taken for nearly three days!" the filing says. "From a business point of view, we had no access to emails and lost all contact with our clients and users."

That was a month ago. The deletion occurred on the morning of Saturday, June 8th. So, the company turned to a litigation-based support request.

The complaint goes on to detail the company's inability to get a response from Google. "At this point, we contacted Google several times over the next week, increasingly desperate, creating multiple cases [support requests], in an effort to restore our data access," the filing says. "All efforts failed and at the end we received a one-line email that stated our data was lost and couldn't be returned to us."

Except perhaps not. According to the complaint, the company was informed – it's not clear whether Google or a third-party advised this – that it could seek a subpoena or file a civil lawsuit to access its data. So that's what it has done.

The Register reached co-founder Christiaan Fulton by phone to learn more about what happened but he said he was driving and wasn't immediately available to provide further details.

Mosss (Musey) said while investors have put $1.5m into the firm, it's not seeking monetary damages. "While our data has real monetary value...it is the work created by scores of employees and contractors over three years that's irreplaceable," the court filing says, citing user feedback studies, UX/UI design and testing, algorithm evaluations, demos, videos, engineering attempts and the like.

The Register asked Google for comment but we've not heard back.

The Register understand this applies only to users deleted from G Suite accounts. There’s no recovery option for deleted accounts. ®