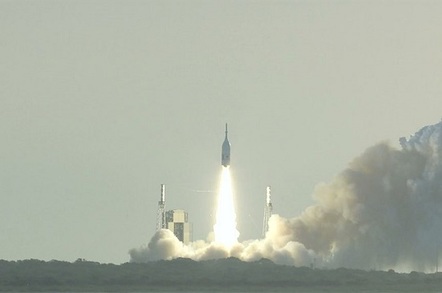 NASA completed the Ascent Abort-2 test of its Orion spacecraft today, deliberately crashing a test version of the capsule into the ocean after successfully demonstrating the Launch Abort System (LAS) would do its thing.

The launch, at 0700 EDT (1100 UTC) from Space Launch Complex 46 at Cape Canaveral Air Force Station in Florida saw the Northrop Grumman-provided booster send the 22,000 pound Orion test article to 31,000 feet. Approximately 55 seconds after launch, and with the stack travelling at over 800 miles an hour (1,287kmph), the LAS was activated, yanking the capsule away in a simulation of an abort during launch.

The timing was deliberately set to test things when the stumpy stack was under the highest aerodynamic loads.

Unlike SpaceX and Boeing, NASA's Orion employs a LAS familiar to Apollo or Soyuz fans. The LAS is attached to the top of the protective cover which houses the capsule and pulls rather than pushes stricken astronauts to safety.

Not that anyone was aboard this particular simulated Orion, of course.

The steerable LAS also enjoys 400,000 pounds of thrust, considerably more than the Mercury-Redstone that put the first American into space in 1961.

This test was all about that LAS and so did not bother with fripperies such as parachutes or pre-splashdown capsule orientation. A separate test series will check out those parachutes in various conditions. However, the test did demonstrate that the LAS would re-orient the capsule following an abort before firing one more time to separate from the crew module.

Although data flowed to the ground as expected, the test included 12 back-up data recorders (equipped with GPS trackers) which were ejected into the ocean in pairs as the capsule tumbled its way to an impressive, and destructive, meeting with the water.

"It was a very smooth liftoff," Kirasich said. "By all first accounts, it was magnificent."

The LAS has, of course, already had some development. 2010's Pad Abort Test 1 checked out how an early version of the thing would work from the launch pad. The LAS will subsequently turn up on Artemis 1, although not fully active since the first SLS launch will not be crewed.

Artemis 2, however, will have astronauts inside the Orion. And, unlike their Space Shuttle predecessors, NASA's SLS crews will have a realistic escape option should things go horribly wrong during launch. ®