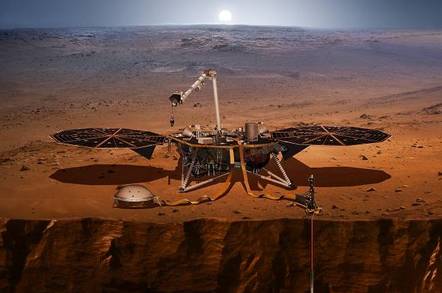 NASA engineers are trying to fix an instrument on the Mars Insight lander that was supposed to burrow five metres (16 feet) into the Red Planet's surface – and has instead tapped out at just 30 centimetres (one foot.)

The device, known as the Heat Flow and Physical Properties Package (HP3), is essentially a very fancy hammer. It features a long rod, nicknamed the “mole,” designed to burrow into the Martian regolith. The complicated system essentially uses a motor and spring to hammer away at the ground, sticking the rod in deeper and deeper, with a sensor at the tip to measure Mars’ internal temperature.

The mole was meant to slowly make its way down through the rust-colored soil, though it hasn't been able to make much progress. NASA engineers commanded the instrument to stop digging after it was deployed, to little avail, for a few days at the end of February. Only now are they talking about the malfunctioning mole.

The boffins had expected soil to flow around the hammering head, though it appears that isn't what's happening, and something is stopping it from hammering deeper. It's possible the soil under the mole is compacting and stopping any further action. Another possibility is that the burrowing head has hit a large rock.

“The images coming back from Mars confirm what we've seen in our testing here on Earth," said Mattias Grott, a project scientist working on HP3 at the German Aerospace Center (DLR), who is helping NASA on the Insight mission, this week. "Our calculations were correct: This cohesive soil is compacting into walls as the mole hammers."

In an attempt to save the mole, engineers have removed a protective sheath surrounding the probe to get a better view of its surroundings. “We've completed the first step in our plan to save the mole," said Troy Hudson, a NASA scientist and engineer. "We're not done yet. But for the moment, the entire team is elated because we're that much closer to getting the mole moving again."

The team hasn't entirely ruled out the possibility that the mole may have hit a rock. They hope to extend a robotic arm with a scoop attached to move the soil out of the way so the thing can start digging again.

However useful the robotic arm may be, there's one thing it can't do: pick up the mole and set it down somewhere else. InSight is a relatively low-budget probe for NASA and isn't as well equipped as a mission like the Curiosity rover.

The Insight lander was launched into space in May 2018, and reached Mars some six months later in November. It was expected to study the planet's interior structure and its tectonic activity to help Earth's eggheads understand how the rocky worlds in the inner Solar System formed. ®