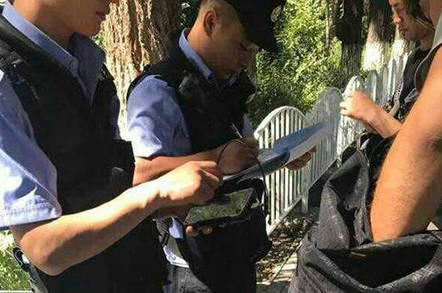 Authorities in a tumultuous region of China are ordering tourists and other visitors to install spyware on their smartphones, it is claimed.

The New York Times reported today that guards working the border with Krygyzstan, in China's Xinjiang region, have insisted visitors put an app called Fengcai on their Android devices – and that includes tourists, journalists, and other foreigners.

The Android app is said to harvest details from the handset ranging from text messages and call records to contacts and calendar entries. It also apparently checks to see if the device contains any of 73,000 proscribed documents, including missives from terrorist groups, including ISIS recruitment fliers and bomb-making instructions. China being China, it also looks for information on the Dalai Lama and – bizarrely – mentions of a Japanese grindcore band.

Visitors using iPhones had their mobes connected to a different, hardware-based device that is believed to install similar spyware.

This is not the first report of Chinese authorities using spyware to keep tabs on people in the Xinjiang region, though it is the first time tourists are believed to have been the primary target. The app doesn't appear to be used at any other border crossings into the Middle Kingdom.

In May, researchers with German security company Cure53 described how a similar app known as BXAG that was not only collecting data from Android phones, but also sending that harvested information via an insecure HTTP connection, putting visitors in even more danger from third parties who might be eavesdropping.

The remote region in northwest China has for decades seen conflict between the government and local Muslim and ethnic Uighur communities, with reports of massive reeducation camps being set up in the area. Beijing has also become increasingly reliant on digital surveillance tools to maintain control over its population, and use of intrusive software in Xinjiang to monitor the locals has become more common.

Human Rights Watch also reported that those living in the region sometimes had their phones spied on by a police-installed app called IJOP, while in 2018 word emerged that a mandatory spyware tool called Jing Wang was being pushed to citizens in the region. ®