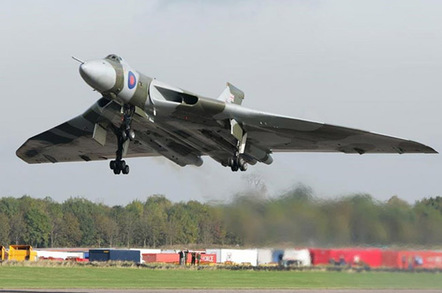 Feature What do you do when your jet-powered speedboat restoration project grinds to a halt because of bureaucracy? Obviously, you find yourself a convenient Vulcan bomber and start restoring the engines to running condition, as the Bluebird Project is currently doing.

The Bluebird Project came together to restore the 1960s British jet-powered speedboat turbojet hydroplane Bluebird to running condition. Donald Campbell, Bluebird's owner and pilot, was killed in January 1967 when the boat disintegrated during a high-speed run across Coniston Water in the Lake District in northwest England.

Bluebird sank but the project recovered her and rebuilt the vessel to immaculate running condition, successfully testing her last year – though the boat is currently trapped in a bureaucratic wrangle over whether it should be shut away in a museum or run regularly for the public to see and enjoy.

What does all this have to do with Vulcan engines? Bill Smith, the engineer who part-owns Bluebird, told The Register: "Bluebird's air starter was one of only two ever made, for a Hunting blown-flap aircraft. In March 1966 a certain Mr Campbell borrowed the other and didn't give it back."

Some parts for that air starter unit were common with the Avro Vulcan, the Cold War nuclear bomber nicknamed the Tin Triangle.

While scavenging parts from preserved Vulcan XL319, to restore Bluebird's air starter to running condition, Smith said his team got the Vulcan's engine bay access doors open "and wondered, hmm, will that start? Come on then, let's have a look."

Ten years after wondering that, they're now at the stage of "picking the best engine" and putting the theory to the test while Bluebird's future as a living, breathing machine hangs in the balance.

"There's a lot of talent in that workshop," said Smith, describing how the Start A Vulcan project was something that largely came about because the Bluebird team wanted to keep themselves occupied. Hence XL319's No.4 engine, a twin-spool Bristol Olympus, is now receiving enough care and attention to be started for the first time since the retired old bomber landed for the last time at what was then Sunderland Airport in the 1980s.

Unlike modern gas turbine aero-engines, which are fearsome beasts full of electrically actuated valves, regulators and digital control gubbins, Olympuses "are all hydromechanical", in Smith's words: "It's all pistons and diaphragms, pouring paraffin into a big flaming tube."

...and that's the first jet pipe temperature indication in this cockpit since 1983. (We had a blowtorch on the thermocouples up the pipe!) pic.twitter.com/xe8nMgiYLI

Although No.4 Olympus was seized when they started work, by accessing the void for the hydraulic pump (which wasn't fitted) the team were able to make a silicone mould of the driveshaft spline, machining up a spanner with which to turn the turbines over and break them free of decades of crud.

Rather than needing a laptop and a compsci degree to diagnose and repair, working on the big Olympus means getting greasy – and occasionally "a nice shower of oil" as aged pipes and tanks inside the Vulcan's wings reveal their contents to unfortunates beneath them.

On today's episode of 'Bill reaches up into the Vulcan', we're just seeing how much oil is left in No.4. Not a lot, as it happens. #StartaVulcan pic.twitter.com/W4QavWnWjC

"A modern [jet] engine is like a Formula 1 car with all the computers to manage it," Smith explained, "while a Vulcan bomber is a 1972 Ford Cortina in gas turbine terms." It's bringing the old engine back to life that gives him the most joy about the current project, as he quips that XL319 "from my point of view is a big bit of steel someone's hung my Olympus from... I get an engine to play with!"

There's a (reasonably) serious point to getting the Vulcan engine running again. Aside from being a simply excellent thing to do in its own right, Smith pointed out: "If we don't inspire the next generation, it's just fat balding middle-aged men tinkering."

And what could be more inspiring than a jet engine brought back to running condition? ®

We're the 'perennial price leader' in cloud. See that, AWS? We said it

The Cyber Cold War, everyone

Radio boffins remember the future-ture-ture: From the Cold War to (White) SPAAAAACE

Phwoarrrrr... Look at the valves on that...