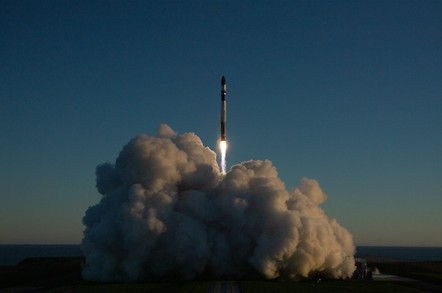 Making It Rain with an Electron (pic: Rocket Lab)

After a few days of frustration for small-sat flingers, Rocket Lab, the company's Electron rocket finally left its New Zealand launch-pad over the weekend.

The launch, the seventh of the upstart outfit's launcher (and the third in 2019), successfully lifted off from Launch Complex 1 on New Zealand's Māhia Peninsula at 04:30 UTC, Saturday 29 June 2019.

The company was quick to emphasise that the figure represented a 100 per cent success rate for paying customers, but was less keen to remember the first of those seven launches ended in failure after a telemetry feed was lost and range controllers pressed the big red boom button back in 2017. That pesky ground equipment played a part in delaying things from the original 27 June launch date.

Dubbed "Make It Rain" (not satellite parts, but for the damp climate of mission procurer Spaceflight's native Seattle), the Electron propelled its seven-spacecraft payload into an elliptical orbit. Its Kick stage then separated to send the satellites on their way to a 450km circular orbit.

Founder and CEO of Rocket Lab Peter Beck was understandably chuffed to note the success, which brings the total number of satellites sent into space by the company to 35.

Lovely deployment. Thank you @BlackSky_Inc and Spaceflight for flying on Electron. https://t.co/RdEtUbp7sA

Among the satellites on board were BlackSky Global-3, two US Special Operations Command (SOCOM) Prometheus, and Melbourne Space Program's ACRUX-1. The total mission payload was 80kg.

The company is hoping to ramp things up to a monthly launch cadence this year, and today's did indeed squeak into the month after the previous launch. While the company remained tightlipped on when the next launch would be, it did say it will take place from Launch Complex 1 "in the coming weeks."

The small satellite launcher is booked up for monthly launches for the rest of 2019 and has the lofty goal of scaling to once every two weeks in 2020.

The company does, of course, have ambitions beyond New Zealand. It is currently in the process of constructing Launch Complex 2 at the Wallops Flight Facility in Virginia, US, and there have been mutterings that the outfit will be bringing its rocketry to a UK space port.

For Launch Complex 2, Peter Beck commented that things were going well: "Groundworks are nearing completion, the launch platform will be installed in coming weeks and fuel tanks have already been installed. We tracking well to have Launch Complex 2 operational by the end of the year."

But as for UK dreams of a vertical launch capability? Don't hold your breath: "At this stage the focus is on Launch Complex 2. We'll continue to explore requirements for additional sites once LC-2 is up and running."

Key to achieving that once-a-fortnight cadence is high volume manufacturing. There is no SpaceX-style reusability here, although that Kick stage is capable of reigniting in order to de-orbit itself following satellite deployment.

Instead, other than minor tweaks here and there, the Electron has been standardised. However, Beck remarked: "The most significant change is the introduction of Photon, the evolution of the Kick Stage to a highly-capable satellite bus."

The new bus, able to support missions with up to a five year lifespan, is equipped with an S-band communication system, attitude control, and the avionics smarts to keep the thing under control.

Doubtless eying another potential revenue stream, Beck said: "It enables small satellite customers to focus on delivering their service from orbit and generating revenue, rather than building their own satellite hardware."

Er, a bit like the many other satellite manufacturers running off a standardised bus.

However, for time- and budget-conscious satellite operators, the idea of a one-stop-shop will hold a certain appeal. ®