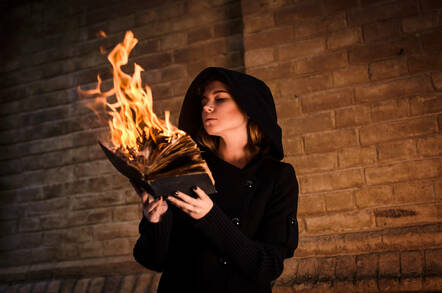 If you bought an ebook through Microsoft's online store, now's the time to give it a read, or reread, because it will stop working early July.

That's right, the books you paid for will be literally removed from your electronic bookshelf because, um, Microsoft decided in April it no longer wanted to sell books. It will turn off the servers that check whether your copy was bought legitimately – using the usual anti-piracy digital-rights-management (DRM) tech – and that means your book can't be verified as being in the hands of its purchaser, and so won't be displayed.

Why has Microsoft done this? We don't know. All the Windows giant said was that it was "streamlining the strategic focus" of its store. But how much can a DRM server possibly cost? And why is that cost too high for an American corporation with $110bn in annual revenue that makes $16.5bn in profit?

What's all the more remarkable is that Microsoft doesn't appear to have considered the impact of its decision on how people will view DRM as a whole.

While a technologically savvy person will have considered the fact that buying an ebook with DRM means that it might stop working at some point in the future, you don't really expect it to happen, especially with a household name like Microsoft. But here we are.

Microsoft is going to issue full refunds starting next week. The money will be put back on the card you used when you bought the book, or if that card has expired, into your Microsoft account so you can use the money for something else in its store – like a game or similar. But that's the extent of it. It's a cut-and-run.

Even more bafflingly, this approach means that Microsoft was obligated to come up with a dollar value for any notes that people have added to their ebooks – because they will vanish too. It's $25, flat fee.

You would imagine that Microsoft considered other options: figuring out how to remove the need for DRM validation for those books; seeing if it could provide a non-DRM version; selling its database of DRM books to another company; or keeping a skeleton DRM system in place.

The fact that it decided against all these options and to simply kill the whole thing off should be a very big warning sign to anyone who has bought, considered buying, or will consider buying an ebook in the future.

The truth is that most ebooks come with some degree of DRM. Amazon and its Kindle ebooks are the biggest in the market – nearly all of them come with Amazon's DRM system. Some don't – like free books or books out of copyright – but Amazon doesn't provide you with a way to know whether DRM is added to a book or not. Another big ebook seller, Barnes & Noble also has DRM.

It is worth noting that there are simple guides online for breaking both Amazon and Barnes & Noble's DRM system but that's not really the point: as a consumer, if you choose to buy a book, you also expect to be able to view it whenever you want.

Microsoft's decision is a painful reminder that the system companies have developed to deal with the fact that digital goods can be shared incredibly easily and cheaply ends up completely changing the longstanding relationship that consumers have with products they purchase. You are no longer buying the products: you are licensing them, and that license can be ended whenever the company chooses.

Microsoft is not the only huge tech company to have done this: last year some Apple users were amazed to find that movies they had "bought" (note, not "rented" but "bought") through iTunes were no longer accessible because Apple had stopped paying those movies' distributors for the license rights.

Apple had the rights when the users bought them. Then they didn't renew those agreements and so the movies effectively disappeared. Apple's lawyers explained to incredulous customers that they had never bought the movies but simply purchased the right to download them at the time of purchase. Apple was doing them a favor of sorts by letting people stream the movies after the purchase.

And Apple did not do what Microsoft has done in this case and offer full refunds: it came up with its own reimbursement figure and applied that. But only after a customer complained. And it has never explained how it comes up with its figures – much like Microsoft and its arbitrary $25 for notations fee.

None of these consumer businesses are keen on clearly explaining the reality of digital goods because, well, it may stop you from buying them in the first place.

And so, if you are smart, and until some kind of standard approach is arrived at, you will only purchase digital content in one of two ways: rent/streaming or physical goods.

We've asked Microsoft if it can explain the reasoning behind its decision. We'll update this story in the unlikely event it decides to do so. ®