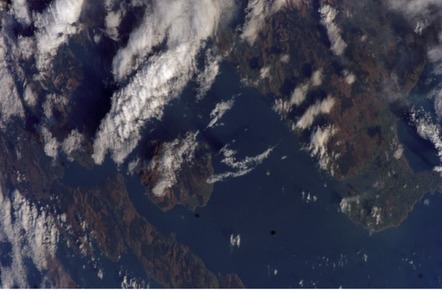 The tortured tale of the Dundee Satellite Receiving Station took another turn in recent weeks as a proposal to rescue the venerable institution suffered a setback.

After over four decades of service, it was announced the shutters were to be pulled on the Dundee Satellite Receiving Station (DSRS) earlier this year after the Natural Environment Research Council (NERC) pulled £338k of funding. NERC reckoned the services of the DSRS could be met through "alternative routes", blowing a hole in funding for the station that the city's University opted not to fill.

We covered the whole sorry tale back in April. The University, it seemed, were determined to shutter the facility and that would be that.

Glasgow-based Clyde Space, founded back in 2005 by Clark and now part of ÅAC Microtec, is all about CubeSats and small satellites. The company has been quietly filling its order book over recent years and is eying the lucrative constellation market.

However, to support its customer's missions, Clyde Space needs to track and control the spacecraft. While the company built its own tracking station in Glasgow, the needs of expansion are pressing, particularly in light of a share issue that injected 82.5m Swedish krona (about $8.8m) into the organisation.

Clyde Space reckoned the facility and staff would be well suited to support its satellite operations and that it would take ownership of some of the DSRS gear, which it would upgrade or maintain. And that geospatial data? Clyde would encourage the University to continue downloading it and make it available more widely.

As an opening gambit, it all seems reasonable enough – no figures were mentioned and a three year period was being considered, at a monthly fee yet to be discussed. The next step would have been to secure the University's agreement and, as the letter put it, "take forward detailed discussions in order to perform whatever due diligence is required to allow agreement to be reached and a contract to be signed."

A glimmer of light at the end of the tunnel?

Nope, not as far as the University was concerned.

While Clyde Space has yet to comment on the situation, the University of Dundee confirmed to The Register that the firm had indeed "expressed an interest in the facility", but the University had "received no firm proposals from them or any other party."

It told us: "It is simply not the case that the University has rejected any viable business proposal for Dundee Satellite Receiving Station."

The problem is, of course, money. The University told us that "until finances are discussed there is no basis on which the University can determine the viability of any proposal” and that the decommissioning would carry on, with the equipment stored.

One might think that pausing things would be a good idea, particularly since, in its own words the University is “in a 'statement of intent' phase with Clydespace [sic]."

However, the University is at pains to point out that "The reason for the decommissioning of the station was the removal of annual core funding by the Natural Environment Research Council of £338,000. The University is not in a position to subsidise facilities such as this if external research grants are withdrawn."

The University is rightly worried for its finances (although not so much that it couldn't find £40k in allowances to help its new Principal move from England) and is keen to point the finger of blame at NERC and its withdrawal of that £338k of funding.

However, things are a little more complicated. Figures seen by The Register put the running costs of the DSRS quite a bit lower than that loss of funding would suggest, coming in at £121.4k for the financial year 2019 – 2020, and £158.3k for the following year.

For those keeping track, two more years of the Dundee Satellite Receiving Station at those figures = one University Principal annual salary.

We put the figures to the University and were told "The £122,000 and £159,000 figures relate to a proposal made earlier this year but this deficit was not underwritten by commercial contracts. The University is not in a position to take on such a shortfall in the hope ambitious income-generation targets are met."

Having already taken the whole "we need £338k" off the table, those estimates, which represent the cost of running things if no commercial work was to come in at all, could be further reduced if the unused portions of the NERC funding were used.

Alas no. As for that last bit of cash, the University told us "With the agreement of NERC, a portion of their final grant is being used to support the decommissioning of DSRS."

After all, those angle grinders and oxy torches all add up. As does a really nice removal van, although the University was at pains to say the cash spanked on its Principal "has absolutely no bearing on the decision to close the Station. This decision was made after NERC announced their intention to withdrew funding and predated the Principal's appointment."

Even with commercial operators expressing an interest, and operating costs reduced, the University remains determined to close the station. And it's all the fault of NERC, m'kay?

Nicola Sturgeon to the rescue! (not really)

The issue has now made its way into the Scottish Parliament, as the member for Dundee City East questioned the First Minister on the subject last week, requesting that the political equivalent of a hobnailed boot be used to persuade “the university, Clyde Space and others with a commercial interest in maintaining the station,” who have hit an impasse to find “a way ahead that could safeguard the future of the centre, which has faithfully served the space community for more than 50 years?”

After banging on about Scotland's place in the space sector globally and some hand-wringing over the situation. Sturgeon replied that she was "somewhat constrained in what I can say, and what we can disclose, in terms of the content of on-going commercial discussions."

Not to worry though! "I will ask the relevant minister to look into the matter further and write to the member with an update as soon as possible," she added. And so the decommissioning continues.

The University's position is, of course, that the equipment will be stored following decommissioning. However, attracting commercial support and performing due diligence is a little trickier once the doors have been closed and the antenna pulled down.

With commercial discussions at an "impasse" and the University unwilling to underwrite the station, a number of crowdfunding sites have sprung up. One of the more realistic is requesting a mere £65k to buy the facility some breathing space to assert its independence from the University.

Good luck with that, people.

We suspect that nothing less than an iron-clad guarantee to replace that NERC money will keep the wrecking storage crew away.

It's all a bit unfortunate. In light of the commercial interest, a potential to reduce running costs to keep the lights on a while longer and, of course, the space sector prestige, the University’s refusal to pause in shutting down the Dundee Satellite Receiving Station is, at best, perplexing. ®