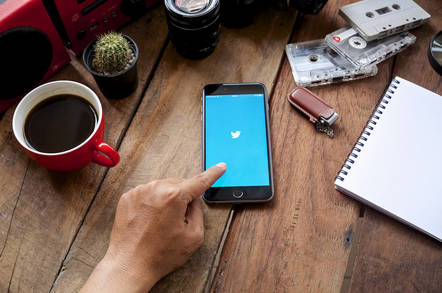 Analysis If you live in a city where people are more likely to make racist remarks on Twitter, there's apparently a high chance that there are increased rates of racially motivated hate crimes, too.

A paper (PDF) describing the finding was recently presented at the Association for the Advancement of Artificial Intelligence Conference on Web and Social Media in Germany this month. The researchers from New York University found the correlation between the number of inflammatory tweets and the number of hate crimes across 100 US cities.

First, the team used Twitter’s Streaming API to obtain 1 per cent of tweets made between 2011 and 2016. They filtered the tweets by place to check the location of where the tweet was posted from. Information about its contents, time-stamp, and the username were also scraped to create a labelled dataset of 532 million tweets.

Next, they trained "shallow neural networks" to classify and divide the tweets into two groups: "targeted racism" or "self-narration of racism experience". The first group describes messages that are directly discriminatory and attacked a specific race, and the second group are merely comments on racist remarks. A tweet that contains a racial slur, for example, isn't always hostile.

Boffins laugh in the face of Twitter's API limits. Now they can slurp info to their hearts' content

A total of 16,000 tweets were used to train the model. Human annotators employed by Figure Eight, a machine learning startup based in San Francisco, manually labelled 1,698 tweets as "discrimination" and 14,302 as "non-discrimination". The researchers defined a discriminatory tweet "as a tweet against a person, property, or society which is motivated, in whole or in part, by bias against race, ethnicity or national origin."

When the 532 million tweets were fed as input to the neural network, the team collected ones that were tagged as "targeted discrimination". They then compared this data with the total number of hate crimes reported in 100 US cities as reported by the FBI using regression modelling.

"We found that more targeted, discriminatory tweets posted in a city related to a higher number of hate crimes," said Rumi Chunara, an assistant professor at NYU who led the study. "This trend across different types of cities - for example, urban, rural, large, and small - confirms the need to more specifically study how different types of discriminatory speech online may contribute to consequences in the physical world."

"It's hard to compare the pairs of numbers of discriminatory tweets to hate crimes for individual cities. But it's worth noting that the regression results, the proportion of discrimination tweets that are targeted in relation to hate crimes, was significant when we included those outlier cities and also excluded them," Chunara told The Register.

"It's important to note that reporting requirements for hate crimes are not standardised by city, which is one reason why we may have these outlier cities. We did look into it and the outlier cities cited are known to have an extremely high number of hate crimes reported in general, and that could be for a variety of reasons such as different reporting practices by the public or police."

The researchers are also quick to point out that although there seems to be a pattern between the number of racist tweets and the number of hate crimes across US cities, there is no causal link.

"We stress that while our work makes no causal claims directly between discussion on social media and crimes, findings from this study are pertinent for better discrimination surveillance and mitigation efforts," according to the paper.

IT titans hit by class-action sueballs, dragged toward court

Uh-oh! Microsoft has another chatbot – but racism is a no-go for Zo

Don't worry, there won't be any more Hitler outages this time, we're told

Child abuse banned, but being plain ol' offensive is all right