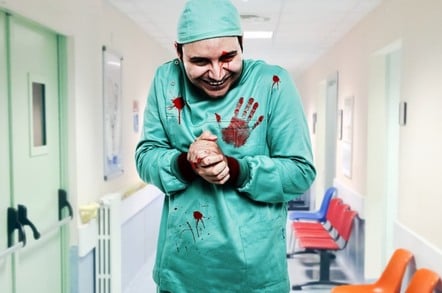 The Welsh, it seems, just cannot get enough of Microsoft as 100,000 NHS staff across the country are set to receive a bucketload of the company's productivity wares.

The deal comes hot on the heels of a £1.2m deal to see 1,521 "maintained" schools in the region getting their sticky fingers on Office 365 ProPlus.

While nearly half a million young people, aged between three and 19, were set to benefit from the education scheme, the NHS agreement is aimed at a good deal fewer people for considerably more cash.

As well as Office 365, lucky staff will also receive Windows 10 as part of the E5 subscription.

The price of the Microsoft deal has been set at £39m and will run for three years from 1 July 2019. The previous deal runs out on 30 June.

The NHS has had a chequered history with Microsoft's software over the years. The cash-strapped organisation has been caught running the likes of Windows XP way past its expiration date as well as unpatched Vista and Windows 7 gear with some famously horrifying results.

Matt Hancock, former Minister of Fun, current Secretary of State for Health, failed candidate for the Conservative Party Leadership and purveyor of an app with enough privacy issues to make even Mark Zuckerberg say "steady on", promised a "tech revolution" in the NHS last year.

And here we are.

Handy, because a scathing report from the National Assembly for Wales' Public Account Committee indicated that the NHS Wales Informatics Service (NWIS) could use all the help it could get.

The £39m is a drop in the £484m ocean the report reckoned was needed to deliver on the lofty goals of modernising things. However, it does indicate a move away from creaking on-premises infrastructure to something a little cloudier.

Director of NWIS, Andrew Griffiths, said the deal "moves our digital estate away from locally managed services and into cloud-based services" as GPs, nurses and other frontline staff get to grips with the likes of Outlook, Teams and OneNote.

Making the NHS's IT infrastructure a little more stable and resilient via the likes of Advanced Threat Protection will also do no harm. Back in the early part of 2018, NHS Digital inked a deal with Microsoft to get Windows 10 rolled out over the organisation, with another £150m pledged to make things more resilient in the wake of the WannaCry fiasco.

NHS: Thanks for the free work, Linux nerds, now face our trademark cops

NHS Digital has, however, flirted with other vendors, reaching an agreement with VMware to give NHS organisations discounts on, er VMware cloud, and money off vouchers for Azure's arch rival, Amazon Web Services (AWS).

The dalliances of NHS Digital aside, Microsoft will be delighted to have beaten off the likes of G-Suite and open source alternatives on the frontline for NWIS. For the next three years at least. ®