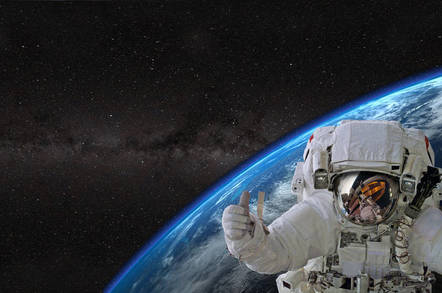 Humans may be able to colonize space after all, as a new study shows frozen sperm seems to be unaffected by the effects of microgravity.

Scientists from Dexeus Women's Health, a gynecology and reproductive health clinic in Barcelona, Spain, and the Polytechnic University of Barcelona, sent ten samples of frozen sperm aboard a CAP10 aircraft. Yes, we know: aircraft. Not an actual craft in outer space.

After the experiment, the researchers studied the wriggly male reproductive cells to see if fertility changed before and after the flight. They checked the sperm’s concentration, structure, how fast they swam, and if the DNA was damaged at all. There were, apparently, very minor changes to the semen. Maybe because it was just 160 seconds, but hey, we're not the experts here.

The differences were not down to microgravity, explained Montserrat Boada, a senior clinical embryologist at Dexeus Women’s Health. Instead, they’re “probably [more] related to heterogeneity of the sperm sample than to the effect of exposure to different gravity conditions.”

In other words, male astronauts may suffer brain damage, a bad back, blurry vision, and a greater risk of cancer, but the frozen contents of their testes will probably be okay.

Humans, therefore, may be able to populate alien worlds with the help of sperm banks sent through space, the researchers reckoned. The semen will survive the cold and the lack of gravity, it is hoped. “Some studies suggest a significant decrease in the motility of human fresh sperm samples, but nothing has been reported on the possible effects of gravitational differences on frozen human gametes, in which state they would be transported from Earth to space,” said Boada.

Radiation damages the quality of sperm. The impact is greater on fresh sperm in the body than frozen sperm protected in cryotanks, though. The team said their results were preliminary, and hoped to perform more experiments with larger quantities of semen exposed to longer periods of microgravity. Ideally, the samples would be sent aboard real spaceflights.

“If the number of space missions increases in the coming years, and are of longer duration, it is important to study the effects of long-term human exposure to space in order to face them. It's not unreasonable to start thinking about the possibility of reproduction beyond the Earth,” she concluded.

The results were reported at the 35th Annual Meeting of ESHRE in Vienna, a conference on reproduction held in Vienna, Austria, this week. ®

Astronaut reproduction could be possible one day, boffins reckon

Most enthusiastic bankers are in London and the South East

NSFW Computerized consort goes back to the shop for repairs

Now Spanish sperm takes a kick to the cojones