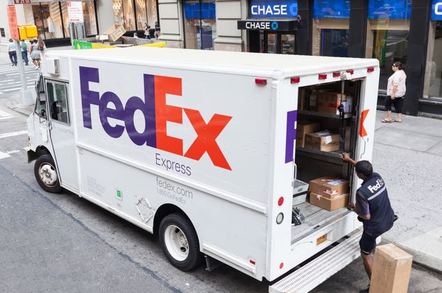 The lawsuit, filed yesterday in US federal district court in Washington DC, seeks to prevent the Department of Commerce from enforcing prohibitions contained in the Export Administration Regulations ("EAR") against FedEx, specifically the Entity List.

It's unlawful for American companies to export goods or services to individuals or organizations on the Entity List without specific permission from the Commerce Department. FedEx is upset it has to check an unexpected large load of packages going out to Chin..., er, overseas.

The lawsuit does not object to US government export controls targeting any specific foreign country or company, and does not gripe about any specific nation.

But it follows the addition of several Chinese tech firms like Huawei to Entity List, a consequence of the ongoing trade dispute between the United States and China. It also lands in the wake of FedEx's misdelivery of two Huawei shipments, an incident that underscored the business risks facing FedEx and other logistics companies if the trade conflict escalates.

That swelling list is probably piling loads of expensive overhead on FedEx as it has more parcels than expected to check and police, and the penalty for missing an infringing box is non-trivial.

"FedEx believes that the EAR violate common carriers’ rights to due process under the Fifth Amendment of the US Constitution as they unreasonably hold common carriers strictly liable for shipments that may violate the EAR without requiring evidence that the carriers had knowledge of any violations," the company said in a statement. "This puts an impossible burden on a common carrier such as FedEx to know the origin and technological make-up of contents of all the shipments it handles and whether they comply with the EAR."

The shipping giant's complaint observes that US law affords limited immunity to common carriers like internet service providers, telecommunications companies and shipping firms when their customers act unlawfully. Internet companies, for example, rely on Section 230 of the Communications Decency Act to avoid liability for user-generated content posted online. And shipping companies rely on a portion of the Controlled Substances Act to avoid criminal transport charges if they unknowingly deliver contraband.

EAR, however, holds organizations liable for aiding and abetting customers that violate export controls, without offering any safe harbor for acting in good faith.

"Thus, the EAR essentially deputize FedEx to police the contents of the millions of packages it ships daily even though doing so is a virtually impossible task, logistically, economically, and in many cases, legally," the complaint says. "Indeed, the majority of transactions begin with the customer providing FedEx with a previously sealed package."

Lack of a safe harbor provision, the lawsuit states, gives FedEx two choices: continuing to operate under threat of US enforcement action, or ceasing operations and risking legal action from customers and foreign governments.

Past EAR fines have been expensive for FedEx. The complaint notes that a 2018 enforcement action arising from 53 EAR violations, related to the shipment of about $58,000 in goods, resulted in about $500,000 in penalties.

A Commerce Department spokesperson, in an email to The Register said, "We have not yet reviewed the complaint, but nevertheless look forward to defending Commerce’s role in protecting US national security."

FedEx says it's committed to complying with the law in the countries where it operates, but contends what the US government wants is too much.

"FedEx is a transportation company, not a law enforcement agency," the biz said. ®