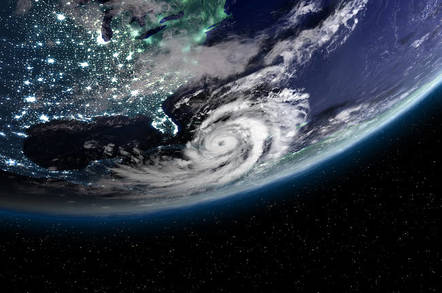 Analysis The weather forecasters responsible for letting millions knowing about weather patterns, including hurricanes and tornadoes, have warned yet again that plans to auction off radio spectrum for 5G mobile networks could have a dangerous impact on their efforts.

The American Geophysical Union (AGU), American Meteorological Society (AMS), National Weather Association (NWA), American Weather and Climate Industry Association (AWCIA), National Hydrologic Warning Council (NHWC), and a dozen other weather groups, have sent letters to US comms watchdog the FCC asking it [PDF] to scale back or stop plans to auction off 5G spectrum to cellular operators because it will likely interfere with their systems – systems that relay vital weather sensor data back to base for analysis quickly enough to predict catastrophic events.

"[We] have previously expressed concern with the proposal… because of the likelihood of interference with the reception of weather satellite imagery and relayed environmental data to receive-only antennas that members of America’s weather, water, and climate enterprise use," reads one of the letters. "We are reiterating that concern in this filing."

The other letters all make the same point: sensor and weather monitoring systems are hardwired into a spectrum band that the FCC wants to sell off, at vast profit, to companies creating the next-generation of super-fast 5G networks. These 5G signals will likely interfere with transmissions from these sensors, hindering forecasting and disaster planning.

According to the weather folk, there is no good alternative to them using those particular radio bands. They need to send the data over the air because other means – like the internet – are not sufficiently robust in extreme weather conditions. Their equipment is set up to work at specific frequencies, linking countless sensors and gadgets out in the field to satellites and ground stations, and it's not just the case that they can shift bands.

Allowing mobile companies to send data over these frequencies would add a lot of noise to the system, they warn.

Back in May, the head of the National Oceanic and Atmospheric Administration (NOAA) told a Congressional hearing that the current approach would lead to a 77 per cent loss in data from its microwave sounders – which measure and report temperature and moisture levels – which would lead to a 30 per cent drop in forecasting accuracy. Or, basically, going back the 1980s.

In response to those concerns, the FCC ordered that studies be undertaken that looked into how the spectrum could be shared between weather forecasters and mobile operators to minimize disruption. One key study – by NOAA – won't be completed for another year and weather forecasters are asking the FCC to hold off making any decisions until that report is completed, published, and fully discussed.

Gather round, friends. Listen close. It's time to list the five biggest lies about 5G

But commercial pressures – and a mobile-operator-friendly FCC – are driving toward an earlier auction, with some arguing that if the FCC simply requires mobile operators to limit the power of their transmitters, it should all work out fine. The weather associations have made it plain this month however that they are still very far from happy about that idea.

The main American media company that provides commercial weather forecasting services, AccuWeather, said in its own letter [PDF] that it want to "expresses grave concern regarding the [new plan], which, while not granting the Petition, technically speaking, raises many of the same concerns."

It notes that "interference to… downlinks can delay… dissemination of vital information to the public to aid and protect life, property, businesses, and government operations. The loss of seconds can mean the difference between safety and grave risk to life and property."

It shoots down the FCC's suggestion that they use the internet instead, arguing that such a system "would be prone to outages and disruptions that would prevent the availability requirements that AccuWeather relies on."

Other weather orgs are worried that the FCC will push on regardless, and so are arguing that the watchdog sets up a system where people in the forecasting trade can voluntarily register their antennas along with details about whether it transmits time-sensitive environmental information to the government to public safety organizations. The idea behind that is that those antennas would then be given the same interference protections as federal installations.

The same message is relayed again and again in the letters: we all love watching videos on our phones, but we'd rather know ahead of time and with greater accuracy where a tornado or a hurricane is going to hit.

"Innovation in consumer electronics and mobile enhancement will no doubt enable new exploration and achievement," the AWICA notes [PDF]. "This mobile network technological advancement will bring significant business opportunity to the entire Weather Enterprise and may unlock new ways to benefit society in the form of more accurate forecasts, higher resolution predictions, and broader distribution of critical weather information. However, we stress this advancement cannot come at the cost of reduced access to highly reliable and timely weather satellite data, which is used by federal and non-federal users alike to provide life-saving warnings and information."

It's not clear if the FCC is listening. In his announcement pushing the latest proposal, chairman Ajit Pai complained that previous effort to auction off this spectrum had been "all talk, no action." The federal regulator, under Pai, has frequently made decisions in the mobile operators' favor despite howls of protests from others. One of those – which allows 5G operators to install their equipment with minimal delay and for a single flat fee anywhere in the United States – is currently being reviewed by the Ninth Circuit Appeals Court.

It's not clear that the mobile operators would even accept a lower-power option: to do so, they would have install a lot more expensive equipment.

Unsurprisingly, the mobile industry has also sent letters to the FCC telling the regulator how everything is going to be fine, and how they need to the spectrum to deliver the mobile services that everyone wants.

Which is in its own way, a microcosm of the debate over the much bigger and broader issue of climate change itself. Sure there is lots of evidence that continuing to move forward on the same path we are on would cause massive, lethal repercussions for tens of millions people but on the other hand, ain't it great that we can stream America's Got Talent to our phones? ®