One goes up, one stays on the ground and one gets ready: It's a week in space

A trio of heavy lifters in rocket boffinry 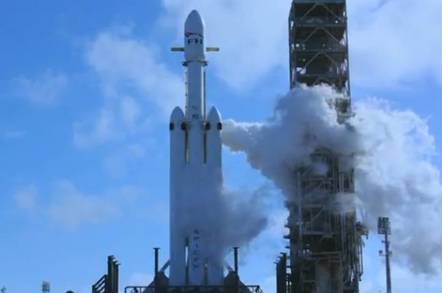 Roundup There was European joy, Russian frustration and a bit of a tease from the Falcon Heavy last week. And while the Pi 4 is the new shiny, spare a thought for the computers on the ISS.

Arianespace fires up another Ariane 5

It was a busy week for big rocket fanciers as the hulking Ariane 5 lobbed the T-16 and EUTELSAT 7C satellites into orbit. The combined payload clocked in at an impressive 10,594kg.

The launch was the fifth of the year for Arianespace and the second of the Ariane 5 itself for 2019. The Ariane 6 is expected to make its debut some time in 2020.

The Ariane 5 lifted off at 2143 UTC on 20 June from launch complex 3 in Kourou, French Guiana and deposited the satellites into a geostationary transfer orbit just over half an hour later.

The upper payload in the long version of the Ariane 5's faring was the AT&T (DirecTV) T-16, manufactured by Airbus Defence and Space. T-16 will blast services in the Ku and Ka-bands over the continental United States, Alaska, Hawaii and Puerto Rico for the next 15 years.

Sitting beneath T-16 was the lighter weight EUTELSAT 7C, a high power broadcast satellite for markets in Africa, Europe, the Middle East and Turkey. Based on Maxar's 1300 class platform, the spacecraft is also expected to enjoy a 15-year lifespan.

With this launch, Arianespace has now orbited a total of 376 geostationary satellites, including 176 on Ariane 5. While Ariane 5 has been pretty reliable over the years, with only its first and fourteenth launches ending in total failure, and three others (including last year's VA-241 fiasco) deemed "partial failures", its end is in sight with the arrival of the considerably cheaper Ariane 6.

Still, there will be a final hurrah in 2021 for the veteran launcher. It will get to launch the James Webb Space Telescope. Assuming NASA ever finishes the thing.

With hours to go ahead of launch, the plug was hurriedly pulled on the launch of a new orbital observatory, Spektr-RG atop Russia's heavy lift vehicle, the Proton M.

A terse statement issued by Roscosmos noted that "a deviation in the implementation of the cyclogram of using one of the one-time chemical current sources was identified."

We'd translate that as being an underperforming battery. And, being a one-time-use battery, it's probably somewhere in the Proton rather than the Spektr-RG satellite itself. Roscosmos has remained tightlipped on the matter but indications are that the Proton-M is going to have to be rolled back to the assembly building so engineers can deal with the problem ahead of a second launch attempt on 12 July.

It's a shame, because right now Russia doesn't have much in the way of operational space observatories dedicated to science. The Spektr-R radio telescope went silent in January this year.

The follow-up to the Spektr-R, Spektr-RG, will lurk at the L2 Lagrange point for at least siX-and-a-half years, spending four of those years conducting eight sky surveys. Its principal goal is to chart a map of the Universe in X-rays.

The team behind it reckon it will take the spacecraft around three months to reach the L2 point, a cruise during which systems can be checked out.

Assuming it gets off the ground, of course.

Rocket launches are never straightforward, and with the next SpaceX Falcon Heavy launch the new-space heavy-hitter has even more of a challenge on its hands than usual.

Following a successful firing of the monster rockets' engines, Musk's mighty missile (three Falcon 9 boosters strapped together) is scheduled to light up the Florida night at 2330 ET on 24 June with a lift-off from the former Shuttle and Apollo Launch Complex 39A at Kennedy Space Center.

The STP-2 mission, which is the first ever for the US Department of Defense on a Falcon Heavy, is intended to demonstrate that SpaceX is capable of supporting missions for the agency as well as showing that the whole booster reuse thing really does work. To that end, the side boosters that come from the Arabsat-6A are to be used again.

Alas, the centre booster from April's mission toppled over during transportation back to port.

Over a total mission duration of six hours, the Falcon will be expected to perform four separate upper-stage engine burns to three different deployment orbits and a final propulsive passivation manoeuvre.

Both side boosters are expected to land back at Cape Canaveral Air Force Station while the central booster will touch down on SpaceX's Of Course I Still Love You drone barge, stationed some way out in the Atlantic.

While the mission is intended as a test, the Falcon Heavy is packed with payloads for deployment, including DSX for the Air Force Research Laboratory to research the radiation environment of Medium Earth Orbit (MEO), COSMIC-2, to measure the changes in a radio signal as it is refracted in the atmosphere, and the intriguing Tether Electrodynamics Propulsion CubeSat Experiment (TEPCE), which will demonstrate the feasibility of using electrodynamic propulsion by deploying a 1km electrically conductive tether and perform orbit-changing manoeuvres without consuming any fuel.

Other satellites in the payload include OCULUS, to provide calibration for ground-based observations of satellite altitude and configuration and PROX-1 to demonstrate satellite close proximity operations and rendezvous.

Other satellites stuffed into the Falcon Heavy's faring make the whole thing a most delightful box of boffinry.

Current forecasts (PDF) warn of a 30 per cent chance of the weather holding things up.

HPE? Who he? Astro Pi is still rocking on the ISS

While the focus of the Raspberry Pi Foundation's Eben Upton was the Pi 4 Model B, he was also happy to talk about the Astro Pi units still aboard the ISS, even as HPE's super computer was returned to Earth.

Code continues to be run on the ISS units and, while Upton observed "they are rather antique," he told us, "they've been up there for ages and we don't have any indication they're going to stop being up there."

Other than a coating to protect the environment of the ISS, the guts of the Astro Pi are relatively stock and, according to Upton "they don't crash".

Of course, this inadvertent hardening was likely down to the simplicity of the Pi. Upton boasted "we accidentally have a quite space-tuned piece of hardware!"

However, the release of the Pi 4 has seen the performance gap between the machinery on the ISS and that on the desks of students widen further with some code bound for the lab rejected because "you're using too much processor power."

As such, there are no plans to upgrade the Astro Pi machines at present, "but I'd like to". Upton has some advice for those trying to simulate to sheer power of the Astro Pi:

NASA: We need commercial rockets! SLS: Oh no you don't!

NASA: Been there, done that