'Expect actual number to go to be much less' says firm, as 1k put hand up for voluntary redundancy 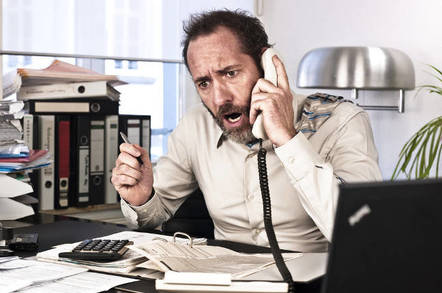 Exclusive DXC Technology has told UK government and Unite that – in a worst case scenario – more than 2,000 locals could be made redundant in the latest round of expense cuts, which could also include the closure of one site.

The Register revealed in May that DXC had opened a voluntary redundancy programme and dangled improved exit terms to encourage more workers to apply.

Unite wrote to members at the company on Wednesday to clue them in on the latest twist: "Having informed the government and unions that as many as 2,150 jobs could go, to date there ha[ve] been 1,000+ voluntary redundancy applications."

"Before even the VR exercise was completed, management have now announced a proposal that involves compulsory redundancies across the company and including shutting the Chesterfield Regional Delivery Centre," the letter – seen by us – added.

The 300 or so staff that work in the site "predominantly" serve public sector clients, Unite claimed, and due to these "highly sensitive accounts... the work cannot be offshored in most cases".

The mothballing of the Chesterfield branch would leave DXC with Regional Delivery Centres in Newcastle, Erskine, Chorley and Aldershot.

"Outside of the UK the only other country with a large non-digital service base is the US and there engineers are working a day free to save their jobs and agreeing terms and conditions reductions," Unite added.

Prior to swallowing HPE Enterprise Services and becoming DXC, CSC was heavily criticised in Parliament for relentlessly laying off staff. And so following the merger of the two entities, senior management decided to leave the Chesterfield office untouched as it serves the public sector, or so a source close to the company told us.

MP brands 1,600 CSC layoffs as the 'worst excesses of capitalism'

However, the closure isn't surprising to some at DXC because it is a little over 115km (70 miles) to the Chorley site.

DXC is trying to minimise the revenue decline in its legacy business – outsourcing, managed services – to between 5 to 8 per cent a quarter while spinning up the digital lines to grow by 25 to 30 per cent. It has repeatedly said it needs new skills on board to aid this shift.

With this in mind, staff on the digital side continue to be technically certified on AWS, Azure, etc. The company also continues to send some roles to offshore locations including India, Vietnam, the Philippines, Costa Rica and parts of Eastern Europe, where the cost of wages is cheaper. Buying businesses, including the Luxsoft deal that closed this week, are other ways senior management is trying to remix skills.

This is all well and good – DXC isn't alone in suffering the impact of cloud services on big-ticket outsourcing deals, just look at IBM and some of the Indian outsourcers – but the action of these companies is painful for staff on the receiving end.

Unite has said DXC management continues to be "vague" about the actual numbers of jobs that will be chopped but reckon it will be "at least 1,000", it said in communications earlier this month.

According to DXC insiders, the company employs around 8,000 people in the UK.

The union said large cuts mean the pressure on those remaining "is clear" and claimed "managers have expressed concerns at being able to deliver for clients".

A spokesman for DXC sent us a statement:

"DXC is continuously remixing its workforce to ensure that we can provide clients with the right skills in the right places, in line with client demand.

"Recently we initiated a voluntary redundancy (VR) programme to enable employees with the skills that will be less in demand in the long term to leave the business with an enhanced package. Many of the positions that are vacated will be filled by people who have the digital skills that are in high demand from our clients.

"As part of our VR programme, we submitted the required notices to government. These notices necessarily overstate the potential impact to account for the programme’s voluntary nature. We expect the actual number to be much less. The window for our VR programme recently closed and we expect to share next steps with our team within the week." ®

'Frontline workers' of the world, unite! And grab yourselves a Surface Go White Van Man edition

Hoping to buy time, get better settlements... nothing's going to stop the cuts