Cough. I believe you have my stapler 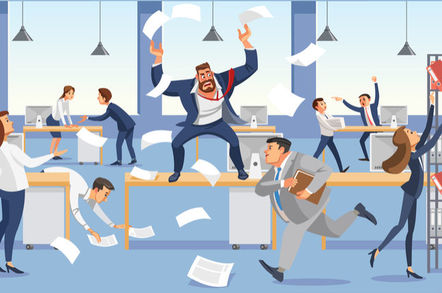 People spend an average of two bloody weeks a year just looking for a frigging desk to work at, thanks to hot-desking.

According to a survey, staff spend an average of 18 minutes every day pootling about for a space to plonk down their laptop. Using the power of maths (220 working days) gives a total of 66 hours a year, or nearly two working weeks.

The increased hassle causes staff stress. The biggest irritation of hot desking, cited by 44 per cent, was time spent setting up a computer. Missing personal space was mentioned by 35 per cent.

Although beloved by beancounters and cost cutting consultants, the actual academic research into hot desking and open plan offices is, unsurprisingly to many who use it, negative. The shift actually seems to reduce interaction and conversation between staff rather than increase it.

Researchers from Harvard University watched staff at two large companies that switched to open plan offices. Researchers gave staff wearable monitors for three weeks before, and after, the walls came down.

They found conversations between staff fell by 70 per cent when they moved to an open plan space, while emails increased dramatically.

Staff at one firm sent 56 per cent more emails and were cc'd on 41 per cent more mails after their cubicles were collapsed. Harvard's research was published here.

The survey was run by hotdeskplus, which is punting a mobile app to allow staff to pre-book a chair in their employer's office so they can actually do their bleeding jobs. They surveyed 1,001 office workers between 14 and 19 March this year. ®