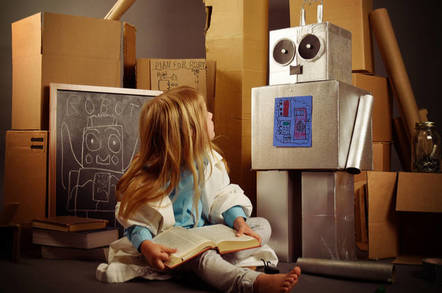 Facebook's software can't catch all the vile content uploaded to its servers by its addicts, which is why the multibollion-dollar antisocial network relies on relatively poorly paid contractors, who work in living hell, to cleanse its pages.

It's far more interested, it seems, in directing robots.

The Silicon Valley giant and aspiring payment kingpin on Thursday bestowed its PyRobot framework on the world under an open-source MIT license, to help people program robots more effectively.

The Python-based framework acts as an abstraction layer for the Robot Operating System (ROS), a popular set of libraries and tools for crafting code that directs robotic devices. It aims to simplify the process of coding robots that move about the world by providing a high-level interface that obviates the need to get into the weeds of drivers, networking and low-level hardware controls.

"PyRobot will make it easier for the research community to use robotics data sets, algorithm implementations, and models, and also help them set benchmarks, compare their work, and build on each others’ results," explained engineers Abhinav Gupta and Saurabh Gupta.

Correction: Last month, we called Zuckerberg a moron. We apologize. In fact, he and Facebook are a fscking disgrace

According to Facebook's eggheads, the tech giant sees PyRobot helping it advance its goal "to develop embodied AI systems that can learn efficiently by interacting with the physical world."

Presumably, Facebook, like other companies, would welcome automatons capable of doing what people do, but at a lower cost even than outside contractors and without complaining about soul-searing snuff videos.

By open sourcing PyRobot, now everyone in the AI and robotics community can explore the foretold utopia where machines deal with drudgery and people have been freed to pursue loftier matters like consuming social media.

PyRobot supports a variety of utility functions like joint position, velocity and torque control, Cartesian path planning, forward and inverse kinematics, and visual simultaneous localization and mapping (SLAM). With the right kit and code skills, one might conceivably program a roving robot to scan one's computer screen for signs of Facebook and then shriek or interpose itself when the image recognition algorithm fires. The possibilities are endless.

Facebook suggests it can promote innovation by combining PyRobot's high-level abstraction with low-cost robot platforms like LoCoBot. To test that theory, the biz has put out a request for proposals that wed the two systems. The only cost involves exempting Facebook from any copyright claims related to one's proposal. The winning submissions will receive a LoCoBot to use.

The ad biz says initially it will provide implementations of pretrained models for navigation, grasping and pushing algorithms and will soon augment PyRobot so it works with simulators like Facebook's own AI Habitat, Gibson and MuJoCo. Its plan also includes expanded hardware support to interface with the Universal Robots UR5, and as well as implementing gravity compensation and other robotics algorithms and data sets. ®