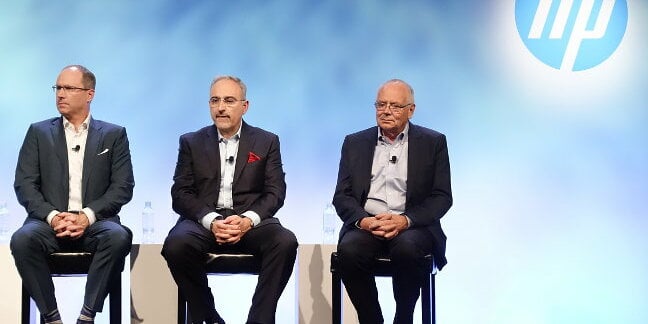 Autonomy Trial Autonomy staff were so paranoid under Mike Lynch's leadership that they feared their offices had been bugged, former head of HP Software Robert Youngjohns told London's High Court – adding that JP Morgan's CIO reportedly told him: "Autonomy is a shit show."

Youngjohns – who has an impressive CV including senior stints at Sun Microsystems, Microsoft and IBM – testified that under Lynch and then-CFO Sushovan Hussain, staff appeared to have been terrified of being spied upon, or "asking the 'wrong' question and being fired" at townhall meetings.

Cross-examining Youngjohns, barrister Sharif Shivji, one of Mike Lynch's legal team, asked him: "In your witness statement you refer to staff feeling that they were under constant scrutiny by senior management with high levels of paranoia and the incessant threat of dismissal?"

Shivji then described an email between Youngjohns and Rafiq Mohammadi, then CEO of Autonomy Interwoven, one of the British software firm's business units: "Your account is that Mr Mohammadi said to you the offices were bugged and that as a result he wanted to speak to you outside; that's correct, isn't it?"

Youngjohns agreed. Shivji asked: "If Mr Mohammadi was concerned that the Chicago offices were being bugged, he must have been concerned about them being bugged by HP, not by Dr Lynch?"

The veteran tech exec shrugged. "To be honest I didn't believe they were bugged at all. I was really concerned about the level of paranoia that it illustrated."

I arrived at the Chicago office, this was my first visit to the Chicago office. It was my first time I was going to sit down with one of my direct reports one to one to have a conversation about his business. His opening comment is, 'You need to understand that historically, these meeting rooms are bugged, I think we should go for a walk.' We then went for a walk around an unremarkable building in central Chicago on a windy day and I remember having most of the conversation in the doorway with stuff blowing past while we talked.

He added: "I got the very direct impression from him that he was referring to prior Autonomy leadership."

Shivji, scrabbling to disassociate Lynch from the paranoia notions, tried suggesting that Mohammadi may have been joking. Youngjohns replied: "A very strange joke, but it could have been."

Fear and loathing in London and Chicago

Youngjohns also stated that he had come to the view that Autonomy's staff were demoralised and paranoid after touring the world, visiting the company's offices and having one-on-one meetings with "every one of my leaders". He described, in his witness statement, how after giving a presentation at Autonomy's London offices in October 2012 he was surprised nobody asked him any questions:

I was told by Ian Black (who had held the senior role of Head of Global Operations for Autonomy for quite some time) that those in the audience were likely afraid of asking the "wrong" question and being fired; that had happened in the past under the leadership of Dr Lynch and Mr Hussain.

"The firm impression I formed," Youngjohns said in his statement, "was that the issues and challenges which Autonomy faced related to the underlying business as opposed to any steps which HP had taken in respect of Autonomy."

He also described what he found when he took over as a senior HP veep in charge of Autonomy, a year after the buyout: "Autonomy was, effectively, running four or five separate business units with little commonality... This led to a disparate set of products, and indeed a disparate organisation, without a clear, coherent vision or a cohesive, accountable operational structure."

Emphasising where he saw the blame for this "structural neglect", he added that this "did not relate to HP's management of Autonomy; instead it conveyed that there were fundamental issues with the legacy Autonomy business".

In what could prove a heavy blow in favour of HP's case that Lynch and Hussain misled the world about Autonomy, Youngjohns also said: "I believed that Autonomy could have been a successful company if its products had been as mature as the market believed."

That maturity was said to have come to a head with JP Morgan, which had been a "longstanding" Autonomy customer. Youngjohns met their then-CIO, Guy Chiarello, a "few months" after taking over the business.

"Before I had even taken a seat," remembered the one-time HP SVP, Chiarello had said: "Autonomy is a shit show." JP Morgan was apparently not happy with the functionality of Autonomy's Digital Safe archiving product, in part because the US bank "had been promised a large number of capabilities at the point of sale which Autonomy was simply unable to either deliver, support or guarantee", with JP Morgan being worried that because Digital Safe was so far from its advertised capabilities that if the bank relied on it, "operational failures... would cause [JP Morgan] to breach its regulatory obligations".

Youngjohns also said that Autonomy "had to make payouts in order to achieve resolution" of some of its customer complaints because they were "frankly, entirely valid".

The phrase "shit show", when relating to Autonomy, seems to have been in common use from all quarters including people inside HP.

In 2011, HP bought Autonomy, a maker of software to keep track of unstructured data founded by Mike Lynch in the UK, for $11bn.