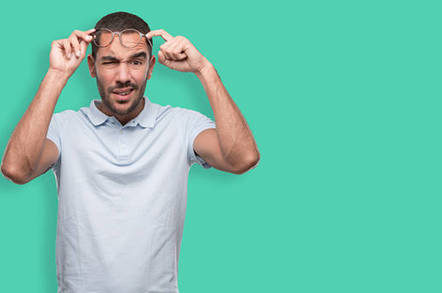 Comment This week saw the greatest sum ever paid for a domain name: Voice.com was sold in an all-cash deal for $30m to a company called Block.one, more than doubling the previous, longstanding record of $13m for Sex.com.

Can a simple web address really be worth $30m? Well, yes, if it is attached to a well-known business. The value of Amazon.com, for example, is far more than $30m. But voice.com is nothing but a word, a destination on the internet that has billions of such destinations and hundreds of other endings other than .com. Its record-breaking purchase makes no sense. Until that is you look at who bought it and why.

Block.one is a cryptocurrency company. It has its own currency called Eos which exists but no one is really sure why. There has been a glut of recent cryptocurrency launches that have imploded, leaving investors out of pocket and in some cases, founders on the run.

Block.one appears to be trying to do something beyond gathering your hard earned. It says its currency and money will be used to create a world of new services that challenge the biggest corporations that exist online.

And Voice is Block.one's answer to Facebook. It is a social media company that will work through the blockchain but with a key difference: it will feed the benefits that come from having a huge global following back to the users themselves. It will also cut out phony accounts and fake news by requiring people to use a government-issued ID to sign up.

It is the Facebook we've all dreamed of. And Block.one announced it at the start of this month. Not only that but it raised an extraordinary $4bn in the lead-up to the launch, so the company is supposedly flush with cash, and says it will spend $150m on building out Voice to rival the current giants. Spending $30m on a domain name that explodes the brand is therefore almost trivial. After all, what is the value of Facebook.com?

There's only one problem though: the closer you look at Voice and Block.one the more it falls apart. In fact, it is so transparently nothing more than a glittering, diamond-studded façade that the fact we are able to find dozens of articles about the company is nothing short of amazing. That kind of self-feeding coverage only highlights the dangerous myopia that continues to exist in the tech and media worlds where anything shiny is worth talking about and hyping, even when there is literally nothing there.

Sure, the company has managed to turn some of its theoretical value into actual dollar value – but very little of it. There is no insight whatsoever into its accounts and, as with all cryptocurrencies right now, its value is nothing but perceptual. There is literally nothing to stop being worth $0 beyond people's belief that it isn't.

Two more red flags: it is based in the Cayman Islands, and every part of the company is run by over-excited tech bros with little or no experience in anything beyond blockchain hype.

Which is where Block.one's products and services come in: they will be the company's and cryptocurrency's underpinning and foundation. They will keep the whole thing alive and moving.

So let's take a look at them:

There is its version of Wikipedia – which, by the way, relies almost entirely on voluntary contributions to function – that, according to Block.one, is "the next generation encyclopedia rebuilt for the modern age. With over 6 million articles and counting, it’s already the world’s largest." The site was founded in December 2014 and launched as a fork of Wikipedia, it's owned by a for-profit company based in Los Angeles. It's name? Everipedia. Ever heard of it? No, nor have we.

But, even better, Block.one does not actually own Everipedia. It only says it has help fund it. By how much? We don't know. To do what? We don't know.

Then there's High Fidelity. It's the new version of Second Life, and one of its founders was also one of the founders of Second Life. It's an open-source application for building virtual environments that will work with virtual reality. Ever heard of it? No, nor have we. It's based in San Francisco. Again Block.one doesn't own it – it has simply invested in it? How much? No one will say.

And then there's Voice – the new super social media platform that gives you everything you want with none of the evilness of Facebook.

So who has Block.one hired to build this product? Presumably dozens of unhappy engineers from Facebook, or Google. It must have been secretly poaching staff from Twitter and others for months, if not years, to get into a position where it is ready to take on companies of this size.

Because, you know, raising money and hyping a new service without having done any groundwork would be, well, ridiculous. No one would ever believe it. They certainly wouldn't write about it, because that would be…

We're still looking for Voice's staff. And its product. There is a webpage, however – on Voice.com no less. It contains absolutely zero useful information but it does have a beta signup form.

What we do know is that users will be rewarded for shifting over to the new service – and rewarded massively. According to one message from Block.one's CEO, if someone with 100 million followers shifted to Voice and brought with them 50 million followers, they stand to "make 50-100m just for switching."

And again with the worthless currency

And, no, you didn't miss the dollar sign. Because users will be rewarded with Voice tokens. Which can be used to, er, spend more within Voice. Imagine what you can do with 50 million Voice tokens!

So, to recap: a company worth billions that is launching a Facebook-killing service just bought the most expensive-ever domain name.

But that company doesn't have billions and doesn't have a Facebook-killing service. It did however just spend $30m on a single domain name, and so garnered more press attention.

It's almost as if it is worth $30m to Block.one if that helps put another brick on the illusionary foundation for its billion-dollar business that comprises of nothing but others' confidence that it is worth something. ®