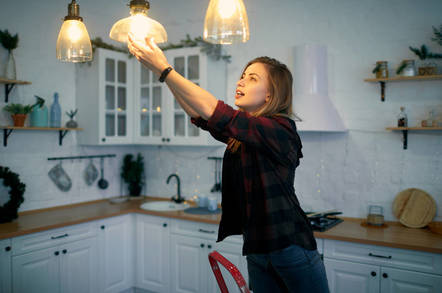 Video Being an early adopter can be a frustrating experience as kinks are ironed out, bugs are squashed, and interfaces are improved. It comes with the territory. However, there is simply no excuse for what General Electric (GE) has done to users of its smart light bulbs.

Called, bafflingly, C by GE, these Bluetooth, Alexa, and Google Assistant-compliant LED products have it all. They allow for "smarter lighting in every way," says GE: put them on a schedule; change the ambiance in real time; control them with your voice while, um, carrying your dog.

There's only one minor niggle: how to reset them if you encounter a glitch, or you need to reconfigure them from scratch. For some reason, GE decided not to install a physical reset button – you know, one of those tiny holes that you have to stick a pin or paperclip into. Instead, it programmed the devices to factory reset after being turning on and off in a specific pattern.

An odd choice, perhaps. Presumably the manufacturer did not expect people to reset their bulbs except on rare occasion. Having said that, being the consumer friendly company it is, GE put together a video to show their customers how to do it. And it is… something.

By "something" we mean mindbogglingly, face-numbingly awful. Douglas Adams could not have invented a finer example of corporate torture. It has been dragged up from the very bowels of hell. It is literally being linked to right now on comedy websites after going viral this week.

So what have the good folks from GE done to turn the simple act of resetting a device into a form of electronic purgatory? They have developed a reset sequence that is both fantastically arbitrary, and far, far too long.

Not only that, but they have unwittingly created a video that, in its effort to be super clear, walks through the entire process slowly and in real time, and somehow makes three minutes stretch into an infinity of tedium.

Put most simply, the factory reset is achieved by cycling the light on and off five times. Which seems a little excessive straight off the bat. Obviously the engineers want to make sure that a light bulb isn't accidentally reset through normal use.

How many engineers does it take to reset a light bulb?

You can see how that might require three cycles: on/off, on/off, on/off. It is just about feasible that someone could do that by mistake. So GE has added a fourth cycle. And then, just to be really, really, sure, a fifth cycle.

Which is great but that fourth and then fifth cycle turns a simple reset into a logistical nightmare that takes an entire minute and requires you to be constantly vigilant. No one should have to go to this much trouble to reset a fucking light bulb. And we haven't even got to the precise timing yet.

Now, we very much doubt the timings have to be this precise. Most likely, the reset process will work anywhere between 5-10 seconds on and 1-4 seconds off. This is not a tightly engineered device; it's a light bulb. But the video is adamant: eight seconds on, two seconds off. No less than five times.

And then, just to make it even more maddening, the engineer in charge of this obsessive video decided to add even more unnecessary precision. Before you start the process, make sure the light is off for at least five seconds. That's five seconds, OK? And then at the end of the sequence, turn it on one last time. At which point it should flash three times, indicating the reset has worked.

What if it doesn't? What about if, during the fourth cycle, you panicked and turned it off after just seven seconds? What if you left it off for too long? Will you get the three flashes?

Well, you may have done it wrong. And if so you'll have to do it all over again until you are capable of following simple instructions, OK, buddy?

But there is another explanation. And this is where your eyeballs may start twitching. You could be using version 2.7 or earlier of the C by GE firmware, in which case you have to run through an entirely different reset process.

How do you know what firmware you are running? THE VIDEO DOESN'T TELL YOU! A video that literally counts through five cycles in precise seconds doesn't give people a vital piece of information over how they can find out which process to use.

But you better hope you're on version 2.8 or higher because the other reset process is even worse. It's the on/off cycles again. But this time the actual timing changes midway through. No, it does, seriously.

And no, we didn't get that wrong, the second reset process actually has SIX rather than five on/off cycles.

What on Earth the GE engineers thought they were doing when they created this insane reset process we will likely never find out. But presumably, after driving dozens of customers completely mad on the phone, they decided they had no choice but to create a painfully clear record of their compulsive obsessive process. And it ain't pretty.

Peeps, stick a reset pinhole in the next version of this bulb. Oh, and you may want to rename it because no one in their right mind is going to buy this product once they’ve seen this video.

Want to see the video? You sure? OK, sit down. And you may want to prepare yourself a stiff drink before hitting play. But here you are. See you on the other side, friend. ®

Smart Lamp could make your office party go with a swing

I can SEE what you're thinking … well, not quite

How many Androids does it take to change a light bulb?