Think we're at RISC of overdoing the Intel puns 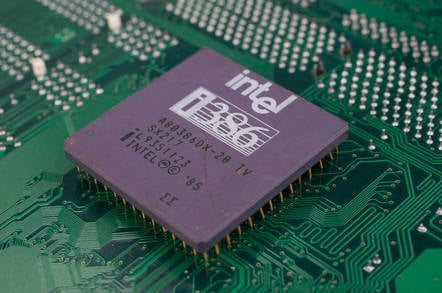 Updated Ubuntu is set to drop support for the i386 processor architecture beginning with its next release.

Canonical, developer of the iconic Linux distro, said on Tuesday the 19.10 release, code named Eoan Ermine, will drop 32-bit i386 from its supported architectures, which include 64-bit AMD64 (x86-64) and 64-bit Armv8.

"The Ubuntu engineering team has reviewed the facts before us and concluded that we should not continue to carry i386 forward as an architecture," said Ubuntu desktop team member Will Cooke.

"Consequently, i386 will not be included as an architecture for the 19.10 release, and we will shortly begin the process of disabling it for the eoan series across Ubuntu infrastructure.

"While this means we will not provide 32-bit builds of new upstream versions of libraries, there are a number of ways that 32-bit applications can continue to be made available to users of later Ubuntu releases ... We will be working to polish the 32-bit support story over the course of the 19.10 development cycle."

The axe has loomed over Ubuntu's i386 builds for a while now: dropping the architecture was last formally proposed in 2018, and upgrades to 18.10 from 18.04 were denied that year for i386 machines. This was to stop people with 32-bit-only x86 computers from upgrading from 18.04, a long-term support (LTS) release with five years of support, to 18.10, a short-term release with just nine months of support, just like Eoan aka 19.10.

Ubuntu is obviously not the first operating system to ditch 32-bit x86, a CPU architecture Intel introduced to the world in 1985 with the 80386 processor. Apple's macOS has been phasing out i386 support. Microsoft, with its massive ecosystem of PCs, still offers 32-bit versions of Windows 10.

Linux letting go: 32-bit builds on the way out

The transition for Ubuntu will likely be more of an issue for developers and users of older apps than anyone who is still actually using a 32-bit machine. Canonical recommends programmers opt to put their 32-bit applications into self-contained Snap packages where they can run with the 32-bit-friendly core18 runtime.

There is also the option of rolling everything into a container running the 32-bit version of 18.04 LTS.

Desktop users will still be able to run the 18.04 LTS Ubuntu build, which will be supported through 2023. Though as Cooke noted, if you're still running 32-bit hardware, ongoing Ubuntu patch support is probably the least of your worries.

"Hardware which will only run a 32-bit operating system is getting pretty rare these days and is unlikely to have enough resources to run the latest release of Ubuntu Desktop," Cooke pointed out.

"You can still run a supported i386 version of Ubuntu, such as the 18.04 LTS, or the same version of one of the flavours which will be more suited to your hardware."

If you are dead set on keeping your 32-bit box, however, there are plenty of Linux and BSD distros dedicated to keeping older machines afloat. ®

Ubuntu-maker Canonical has since attempted to clarify the situation by saying it should still be possible to run i386 applications on future releases. The distro maker is, it seems, simply cutting off updates to 32-bit libraries, which is problematic in itself, particularly for Steam gamers.

Canonical has now back-tracked, and said it will support selected i386 packages in future releases to ensure legacy software runs OK.

KubeCon Europe Because all developers are special, afterall