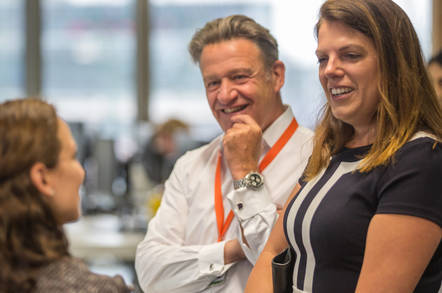 The boss of the gaffe-prone Government Digital Service, Kevin Cunnington, is leaving to head the newly created International Government Service – presumably to tell the rest of the world how to talk a lot about digital while actually doing very little.

Cunnington has held the post since 2016, following Stephen Foreshew-Cain, and before him founder Mike Bracken. Alison Pritchard, who is currently GDS's director for EU Exit and Transformation, will take over as director general of GDS on an interim basis.

In a statement, the Cabinet Office said: "Under his leadership, GDS has helped government realise more than £1bn of benefits through scrutinising technology spending."

According to the Cabinet Office, that figure is an estimate from within GDS rather than an audited figure. The Register has asked for a breakdown of the claimed savings.

Marcus Shepherd, senior researcher at the Institute for Government, said: "The problem is it is hard to externally assess what is being saved... a lot of the services don't report cost per transaction, so auditing the figure is hard.

"The figure does seem woolly to me. That's not to say GDS hasn't steered departments away from pitfalls in the past, but claiming [£1bn in savings] does seem a reach."

The National Audit Office has repeatedly said it could not identify any of GDS's claimed savings with any certainty.

Back in 2017, the NAO reported: "GDS's estimate of savings is heavily dependent on avoided costs in departments. Estimates of avoided costs are high, based on rejected applications in spending controls.

"However, it is not clear that these are good benchmarks; rejected applications are likely to be high cost and savings may be due to traditional controls over spending rather than avoiding duplication through Verify."

One source commented: "Any cost saves were achieved by stopping projects – and it's not obvious that this is a way of saving money, e.g. if the project doesn't happen have we lost more than we gained?"

He added that those claimed savings may also have been offset by a number of disastrous projects, such as the £215m wasted on GDS's attempt to "reset" the Rural Payments Agency Common Agricultural Policy system (which to be fair to Cunnington, did not happen on his watch).

Notably, the Cabinet Office did not refer to the disastrous identity programme Verify in the release about Cunnington's departure.

In March, the Parliamentary Accounts Committee slammed the government for having "no meaningful" blueprint on how Verify will be propped up when the public sector pulls funding in 2020.

Just 3.9 million citizens have signed up to the pan-Whitehall assurance ID platform since its launch in 2016. That is less than one-fifth of the 25 million users predicted to have joined by next spring.

Spending watchdog: UK.gov must say who will prop up Verify from March 2020. C'mon, you've had six months!

According to the Cabinet Office, Cunnington's other achievements include "the introduction of machine learning and speech recognition technologies to government services, and overseeing a substantial increase in traffic to the GOV.UK website, which now attracts more than 15 million unique visitors a week."

Although as another source pointed out: "Why is an increase in traffic good? It could indicate the opposite – lots of people having to come to http://GOV.UK to find out how to complain about pisspoor services!" ®