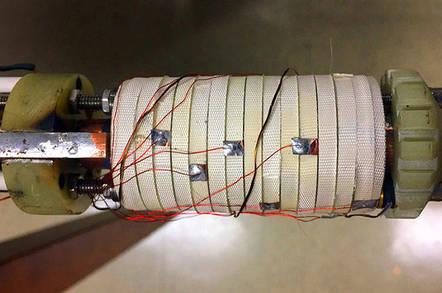 The coil inside the 45.5-Tesla magnet is smaller than the cardboard tube used to hold toilet paper. Image: Florida State University

The gizmo packs a magnetic field strength of 45.5 tesla, making it a tiny bit stronger than the previous record of 45 set by the 45-T. For comparison, most MRI machines operate around 1.5 tesla.

The latest device is made up of a superconducting coil of 14.4 tesla inside a resistive background magnet of 31.31 tesla to produce a 45.5 tesla bad boy. A resistive magnet is made out of more traditional materials like copper or aluminium.

Nicknamed "little big coil", the 45.5 tesla magnet contains a stack of 12 superconducting coils wound around a cylinder of copper. The results, published in Nature this month, explain the coil has to be placed inside a liquid helium cryostat, and that in turn sits inside the copper cylinder.

When it's cooled down to a chilly 7 kelvins or -266.2°C, the magnet enters a superconductive state with a current of 245.3 Amps. The researchers also measured a coil voltage of 9.45 millivolts and a tiny resistance of 47.1 milliohms. They believe that little big coil would still be magnetic at a peak temperature of 85 Kelvin or -188.2°C (considered "high temperature" in superconducting), according to simulations.

"We are really opening a new door," said Seungyong Hahn, first author of the paper and an associate professor of electrical engineering at Florida State University. "This technology has a very good potential to entirely change the horizons of high-field applications because of its compact nature."

Little big coil is "half-pint-sized" and weighs just 390g compared to the whopping 35-ton 45-T magnet that previously held the record since 1999. So what can it be used for? Not much at the moment, apparently.

"We conclude that, although this test magnet cannot yet be considered as a working user magnet, it does provide a viable route to ultrahigh-field superconducting magnets made from copper oxide high-temperature superconducting conductors," the researchers admitted. They hope that it'll be used in particle detectors, nuclear fusion reactors and in medicine one day. ®