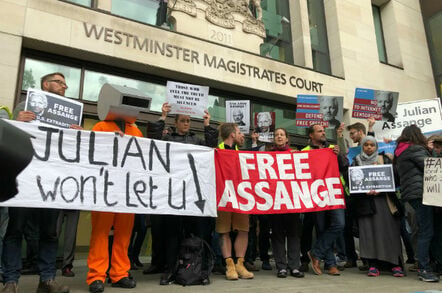 The Chief Magistrate of England and Wales, Emma Arbuthnot, ordered that a five-day court hearing takes place to decide whether Assange should be extradited to the US.

The 47-year-old Australian will likely remain in prison until the extradition hearing date, although his sentence for jumping bail in the UK expires in early October.

Opening the case this morning, barrister Ben Brandon, representing the US government, was reported to have said: "This is related to one of the largest compromises of confidential information in the history of the United States."

I just woke up from a coma. What bail did Assange jump?

Last month, Assange was hauled out of Ecuador's diplomatic digs in Knightsbridge, London, where he had been holed up since 2012.

He had originally sought refuge there, breaking his UK bail conditions, from a December 2010 European Arrest Warrant from Sweden over allegations of sexual assault. After being cuffed by the Met Police, the Aussie had been granted conditional bail by London's High Court with a bond of £200,000, collected from Assange's celebrity backers, who found themselves out of pocket when he became a guest in Ecuador's embassy.

Assange and his camp always maintained that his sojourn in Knightsbridge was in aid of dodging an awaiting nondescript helicopter filled with American agents rather than to avoid being questioned by Sweden. Swedish prosecutors dropped their warrant in May of 2017 and a local court in the country declined to to grant prosecutors a fresh warrant earlier this month.

Assange is charged with 18 offences that amount to hacking and illegally obtaining confidential American government information, something allegedly done along with ex-US Army analyst Chelsea Manning. Among other things, Assange is accused of cracking a hashed password protecting files leaked by Manning, thereby committing a crime.

"By publishing that unredacted material on the internet, Mr Assange created a grave and imminent risk that human intelligence sources, including journalists, human rights defenders and political activists, would suffer serious physical harm or arbitrary detention," Brandon told the court.

Addressing the court via video link and wearing a grey t-shirt and black-framed spectacles, Assange (wrongly) addressed the judge as "Lady Arbuthnot"* while declaring that "175 years of my life is effectively at stake."

People who know the WikiLeaker personally told El Reg that Assange was not expecting to be granted bail after his current sentence ends in early October, but added: "He doesn't see himself as someone who should be in prison."

He is understood to have filed an appeal against his bail-jumping sentence with the Court of Appeal for later this year.

The WikiLeaker's legal team might be paying attention to a roughly similar extradition case from last year, Scott v Government of the USA (PDF), in which a British HSBC forex trader wanted by the Americans for insider trading managed to avoid extradition by invoking the famous "forum bar" in British extradition law. The forum bar was what also saved accused British hacker Lauri Love from the clutches of the US legal system.

For now, old Jules will remain a Category B prisoner in HMP Belmarsh, Woolwich, languishing on the medical wing. ®

English courts, and judges in particular, are hypersensitive to matters of trifling social protocol. In the magistrates' courts you call the judges sir or madam. In the Crown courts you call them Your Honour, and for anything above that it's Milord or Milady, à la Parker from Thunderbirds.