Gonna be so cool when we finally get into space, float among the stars, work out every day, inject testosterone... 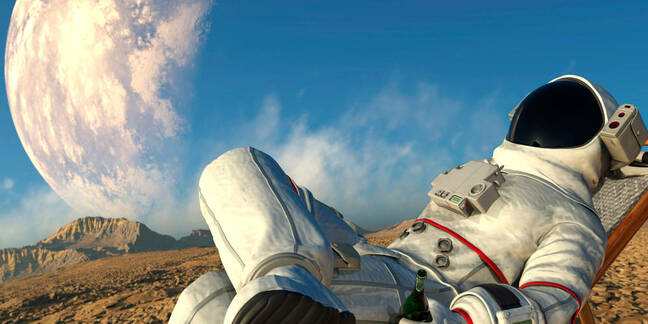 Surviving in zero gravity takes its toll on the human body. Muscular atrophy sets in, and astronauts should not only exercise regularly but consider taking testosterone shots too, according to new research.

In a NASA-funded project, 24 fellas were ordered to stay in bed for 70 days. That may sound nice and relaxing at first, but lying around and doing virtually nothing all day weakens muscles, and over time they waste away. It's a problem for those living in the International Space Station, and for anyone else who hopes to float among the stars for prolonged periods of time.

As space agencies entertain the prospect of sending people to the Moon or to Mars, muscular atrophy is on the list of their top concerns. At the moment, NASA astronauts are ordered to exercise everyday for two hours. They have to run, cycle, and lift weights. But they should also consider injecting testosterone too, according to a paper published in PLOS One on Thursday.

For this latest experiment, the two dozen men were split into three groups. One team was injected with testosterone injections and had to exercise, the second lot were given placebos and also had to exercise, while the third group were fed with placebos and didn't have to exercise. The researchers from the University of Texas Medical Branch (UTMB) in the US also cut out a bit of muscle from each participant's leg before, during, and after the experiments to analyse.

"The study has given us the ability to identify biomarkers that predict how susceptible each individual is to muscle function decline and how effectively different exercise and hormone treatments can combat the atrophy," said Randall Urban, senior author of the paper and a professor in the department of internal medicine at UTMB.

The guys in the first group who had regular testosterone shots on top of a regimented exercise regime had changes in their muscle proteins that contributed towards more muscle growth than the second group that did exercise alone. Unsurprisingly, the third team that stayed in bed all day had the highest levels of muscle loss.

This might seem like something out of the department of the bleedin' obvious but it might have turned out that testosterone had no effect. Well, it does. Bam. That's science.

"The unique insights we've gained on muscle proteins during extended bed rest could someday be applied to predict changes to muscle mass or strength in various situations and then develop a personalized program of exercises and hormonal countermeasures," said Edgar Lichar Dillon, a senior author of the study and an assistant professor at UTMB.

Astronauts may soon have their own personal programmes of hormone treatments and exercise routines that are tailored to their own bodies to minimize muscular atrophy in the future. We dread to think what fiddling around with needles in space is like. ®