Those darn users don't know what they're doing (not like us, of course)

Click on the toothbrush, toggle the flange and press 'Harp'. It's obvious 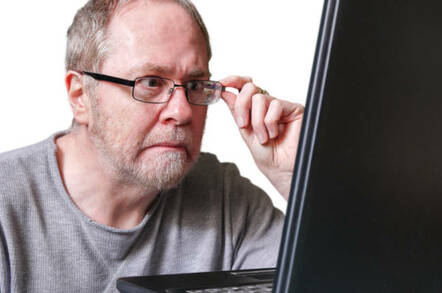 Something for the Weekend, Sir? Haha, what an idiot! He was clicking like mad and nothing was happening! Of course it wasn't because – haha – he was clicking in the wrong place! He looked utterly baffled!

I am regaling my night-shift colleagues with utterly hilarious tales of that afternoon's support calls from the incompetent users in our care. Those nighthawks will appreciate my injection of humour into the beginning of their shift as they are evidently half-asleep after just arriving at work: they are still yawning throughout my anecdote.

It went like this. An editor on the Features Desk [no, not El Reg's – Ed] buzzed me earlier in the afternoon on the company-issued support mobile – you can't mistake it, it's the one with a one-inch mono LCD display and physical buttons – to complain that "the system doesn't work".

Naturally, I had to bite my tongue at this point. I am fully aware that the system does not work. OK, bits of it work, but as a whole it's a poorly conceived, hissing crater of failure. The only thing holding it together are a dozen as-yet undocumented Perl scripts and a ragtag bunch of trainer-fixers masquerading as customer support.

Another reason to give pause is that just because a user says the "the system doesn't work" doesn't mean that it doesn't. The system in question is a content management project we've been rolling out, but for most users "the system" is an all-purpose noun that encompasses everything in their work environment from the moment they step into the building. I have had users calling the Desktop Support number to complain that the main escalator at the entrance was out of order that morning, their angle-lamp hinge squeaks, the bananas in the canteen are overpriced and could I do something about the slow drip in the marble atrium each time it rains?

Perhaps it's not their fault. Ten or more years ago, the average fellow in the street might claim not to understand computers but they usually accepted basic concepts of memory, storage and so on in a way that seems to baffle people today. That's because computers used to be clunky and boxy with identifiable internal components connected with cables and shiny bits that slid into chunky slots with a satisfying thud. Books and magazines would explain what these things did and where they were, often with isometric diagrams to illustrate. Do you remember this sort of thing? 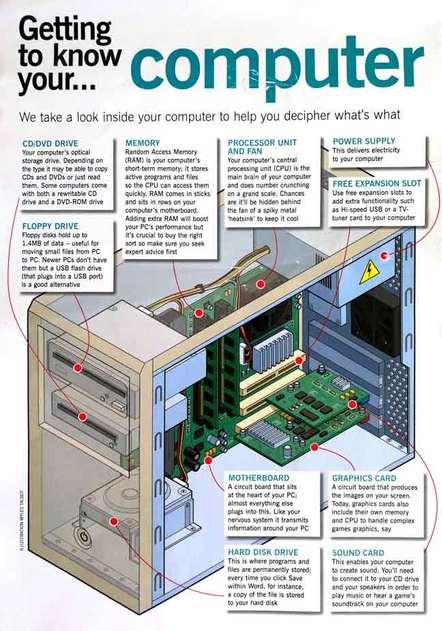 Faced with an all-in-one display unit with everything built into the back – much like a smartphone when you think about it – the average Mo Public sees a computer as a single thing that goes wrong in its entirety.

Hmm, maybe we could reprint classics such as this one. I'm sure some of my users would appreciate learning how much fun it can be to load 2Kb from a reel-to-reel tape, as popularly featured in every Bond villain's hollowed-out volcano. 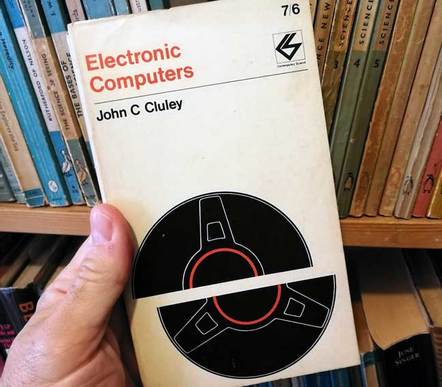 So I mumbled a promise to come right over. The user in question is one of those personable red-faced old geezers who call you "my dear fellow", make dirty jokes in Latin rhyming slang and become delightfully dotty after the demi-bouteille quotidienne that enlivens their lunchtime sandwiches. Besides, I could do with the walk.

Teetering in his swivel chair – he never could work out the tilt function – he demonstrated the abject failure of our £2m CMS before pushing away from the desk for dramatic effect, inadvertently but impressively sending him a full 10 feet behind me and crashing into a potted yucca that appeared at absolutely nobody's behest over the previous weekend. The time it took for him to realise why his computer, his desk and I were suddenly on the other side of the aisle and scuttle back with ungainly and strangely obscene pincer-leg movements allowed me to consider my options.

The problem was simple enough to diagnose. He wanted to click on a menu at the top of his screen. Unfortunately, his mouse cursor was at the bottom of his screen. In his post-prandium confusion, no doubt brought on by the cheese, he had somehow forgotten that simply looking at a menu and clicking with a mouse was not always enough when the cursor was hovering elsewhere; not even if he stared at it very intently, which is what he had been doing during his demonstration.

Haha, what an idiot, eh? I'll save this one to tell the night shift. They will laugh their socks off, think I'm a fine fellow really, not desperately friendless at all, and maybe even invite me to their Friday drinks for once. Please.

But how do I explain to the user the fundamentals on how to use a mouse without sounding pompously critical on one hand or patronisingly condescending on the other? Well, whenever tasked with a difficult decision, I ask myself: what would Delia do?

Ah yes, that's right. The magic isn't in the notes or even in the tune: it's in the performance or, as men tend to say when downplaying female genius, the "arrangement".

I write down on a sticky note the keyboard shortcuts for Save and Exit, and direct my red-nosed, glossy-faced user to perform these deeply important tasks himself. Asked to relaunch the program, he instinctively reaches for the mouse, immediately locates the cursor on screen without prompting and double-clicks on the icon. This is enough to remind him how mice work and he's back at work.

Sorted, and no egos were harmed. I can't wait to laugh behind his back, though.

Just like I did after that fellow last week couldn't print anything and it turned out – get this – he hadn't plugged it in! OK, so it had been unplugged because one of my support colleagues had been using the mains socket to recharge their AirPods, but, hey, what an idiot not to notice, eh?

Oh and that user whose entire OS had rotated 90 degrees! She was foolish enough to press Ctrl+Alt+RightArrow instead of Ctrl+Shift+> which, I'm sure you agree, just shows how utterly hopeless users are. Hoho, what a dimwit.

Not to mention the manager who didn't even know where his computer was! That's right, we'd replaced his all-in-one with a power-user tower system under his desk, and he still thought everything was still built into the back of the display unit. Talk about a moron! I laughed about that with the night shift for ages and I'm sure they were all grinning inwardly behind their stony faces.

I leave the night shift to their work. I can tell my anecdote hit the spot as they are visibly cheering up as I collect my things and don my coat.

Anyway, I must get on as my car is due for collection from the garage. Apparently the mid-fluction unit had worn away at the minge pump, or whatever it was the engineer said. Oh, and something about petrol.

No doubt they're having a laugh at me behind my back, the bastards. All I want is for the car to work. Why can't they just make it simple?

Alistair Dabbs is a freelance technology tart, juggling tech journalism, training and digital publishing. Faithful long-time readers of this column may be pleased or indeed horrified to note the recent return of Ikabai Sital, the monstrous, Lovecraftian terror of unofficial support channels, spotted recently on LinkedIn. Icky would like booking agents to be aware that he/it/they are available for the next Godzilla movie. @alidabbs