Flight Simulator 2020: Exciting new ride or a doomed tailspin in a crowded market? 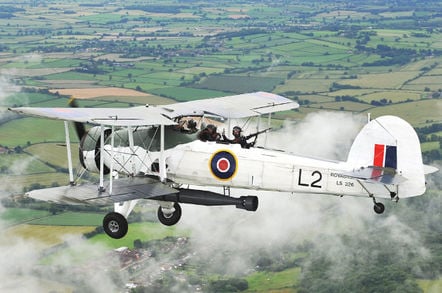 We reserve the right to fangirl ourselves into a puddle over MS2020 if it includes a Fairey Swordfish. Pic: Crown copyright

Comment Earlier this week Microsoft announced that it was getting back into consumer flight simulation, nearly 15 years after abandoning the PC gaming field it largely pioneered in the public mind.

As we reported, Redmond has published a glitzy trailer video that is long on graphics and noticeably short on detail.

Thirteen years ago (count 'em!) MS released the iconic Flight Simulator X, the tenth and final Microsoft-branded edition of the much-loved MSFS series. It was a good mix: the 32-bit sim would run on most consumer-grade hardware of the time at minimal settings; you could turn those settings up to silly levels and torture test your machine; and the architecture made it straightforward to develop custom add-ons.

Most importantly, FSX came with a bundled set of aeroplanes covering everything from commercial airliners down to Alaskan floatplanes – though the less said about the default 747's appalling in-game flight model, the better. You could pootle along at a few hundred feet in a Cessna above your hometown, make international passenger flights in an Airbus A321 or learn how to perform ILS approaches in a Beech Baron.

Indeed, FSX – courtesy of Dovetail Games along with Steam – still enjoys a relatively large following in today's home flight simulation market, with a dazzling array of free and paid-for add-ons still being developed and marketed to this day. It's not hard to imagine that Microsoft wants to get back into those sweet licensing deals again, having woken up to a fanbase that still hasn't fallen out of love with the product after 13 years of nothing.

The underlying game engine of several iterations of MSFS, Microsoft Enterprise Simulation Platform (ESP), was relatively old even back in 2006, being an incremental extension of the game engines underpinning earlier versions of FS.

It is not known whether the new game will use ESP.

Lockheed Martin took up ESP after Microsoft gave up on the platform, turning it into the Prepar3d (P3D) commercial flight simulator package – which, by the way, is absolutely, definitely, in no way still a consumer product with backwards compatibility for most FSX add-ons and a thriving consumer-focused commercial add-on ecosystem. No sir, nope, categorically not: the EULA says it's for commercial or academic use only and that's that.

LM has done a solid job of updating the FSX/P3D engine to make full use of modern 64-bit processor architectures and multi-core CPUs and GPUs, unlocking decent performance and frame rates even on modest hardware. You don't necessarily need an overclocked Intel i9 married to a Nvidia GTX2080 graphics card feeding multiple 4K monitors to get an enjoyably immersive experience, as much as those things help.

However, P3D is still Microsoft ESP under the bonnet and the engine is simply not up to the demands of the modern flight sim community as add-on developers produce ever more detailed and realistic scenery, aeroplanes and weather effects products.

P3D's main consumer competition, Laminar Research's X-Plane, has gained significant market share through providing what some feel is a higher-fidelity simulation engine (FSX/P3D has long been criticised or feeling like "flying on rails"), and has begun capturing more and more of the add-on ecosystem, both free and paid-for.

Competition and the ecosystem

One thing is for sure. To be a credible modern consumer product, MSFS2020 will need a comprehensive overhaul of graphics and critical immersion details from the FSX/P3D default product: FSX's depiction of the world circa 2006, while accurate at the time, is now hopelessly out of date. Airfields have closed, opened and been extended with new runways; radio navigation beacons have been removed, installed and modified; even the world's physical geography has changed in places like the South China Sea.

In turn, bringing the world up to date and making it visually appealing enough for most flight simulation fans is going to upset add-on developers. One of the more profitable lines in sim add-ons is scenery, ranging from individual airports to entire swathes of countries and continents. While the promo video for FS2020 shows a highly detailed simulated world at 4K, baking that into the base product won't endear Microsoft to scenery developers like OrbX.

It's a fine line between having a realistic off-the-shelf simulation game and alienating the all-important add-on community. Consumers themselves won't be keen to abandon their investments in add-ons either, with average spend per head entering the hundreds of pounds, as Navigraph's ongoing surveys find. Once you've shelled out for add-on aircraft, scenery, a weather engine, navigation beacons, moving maps and aeronautical charts, and AI traffic to bring some life to your simulated skies, you can see where they're coming from.

Moreover, a new Flight Simulator will, as a matter of commercial necessity, need to be compatible with P3D add-ons in order to tap into the existing ecosystem – that is, assuming Microsoft has learned its lesson from 2012's dead-on-arrival Microsoft Flight. But with FS2020 reportedly being produced for Xbox as well as PC, perhaps this is a similar throw of the arcade dice.

There is one gleaming hope for Microsoft, which P3D and X-Plane haven't quite managed: commercial licensing of real-world brands. FSX was notable for including aeroplanes from Airbus, Boeing, Textron, Bombardier, and the Garmin GPS 500 and G1000 products, which were obviously included as part of a marketing push.

P3D out of the box, in contrast, features plenty of Lockheed aircraft (mostly FSX add-ons ported to 64-bit and bundled with the base simulation) and not a huge amount else. Re-striking deals with aeroplane and aeronautical equipment makers could be the commercial oxygen that Microsoft needs for FS2020.

There's also the possibility of getting real-world aviation businesses interested:

Thought: If I was the big aerospace industry right now, I'd be thinking - how do we convert these 2.3million YT views into the pilots/engineers/etc that aviation desperately needs in the coming years? https://t.co/wIE47ac4FG

Joining forces with airlines for in-game branding, as well as aviation training companies, could be another way of driving cash. But it needs the all-important consumer buy-in to be a success, and 13 years leaves a heck of a lot of catching up to do. ®