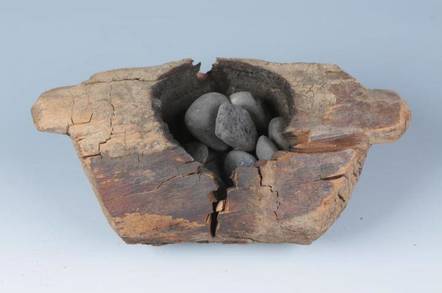 Wooden burners unearthed from ancient Chinese tombs dating back 2,500 years have revealed the earliest evidence of humans smoking cannabis yet.

THC residue, the main psychoactive constituent in cannabis, was found on incense burners buried at the Jirzankal Cemetery in the Eastern Pamirs, a mountainous region in Central Asia. It was discovered by eggheads from Germany's Max Planck Institute for the Science of Human History, the Chinese Academy of Sciences, and the Chinese Academy of Social Sciences.

What’s more, the level of THC in the burners was higher than what’s typically found in wild cannabis plants, suggesting folks back then knew which particular variants of cannabis plants packed more of the feel-good chemical.

“Ancient people chose the cannabis with a high content of THC, so we think they knew the effects,” Yimin Yang, a researcher at the University of Chinese Academy of Sciences, told The Register on Wednesday.

The ancient cannabis was most likely used during rituals to commemorate the dead at funerals. “We deduce that they communicate with the nature, spirits or the deceased people in a hallucinogenic state,” Yang said. The team's findings, published this week in Science Advances, are said to be the “earliest directly dated and scientifically verified evidence for ritual cannabis smoking.”

The data supports the idea that marijuana was probably traded and dispersed across the mountainous regions to create strains with higher THC levels than typically found in wild cannabis plants around 500 BCE. The Pamir Mountains may have been a vital route for the early development of the Silk Road to shuttle goods to and from Europe and Asia.

Although that part is uncertain, one thing is clear: humans have been scoffing, smoking or otherwise taking mind-bending Persian rugs for a long time. Robert Spengler, the lead archaeobotanist for the study and a researcher at the Max Planck Institute, said: "Modern perspectives on cannabis vary tremendously cross-culturally, but it is clear that the plant has a long history of human use, medicinally, ritually, and recreationally, over countless millennia."

Also, let’s not forget the 1,000-year-old drug baggie that contained key ingredients to make the psychoactive drug ayahuasca, and traces of cocaine and DMT, which was spotted in a cave in Bolivia. ®

Not quite the Bake Off they were expecting: Canadian seniors served weed-infused brownies

Mummy, why is Gramps talking to that tree?

Turns out there's a market for marijuana... plants' video surveillance

Analysis Scale-out and tape firm knows how to adapt