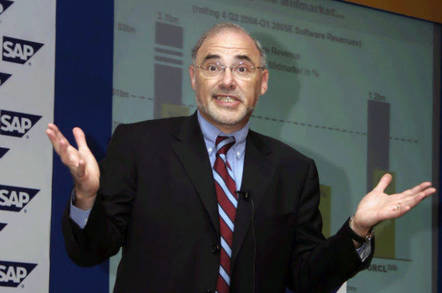 Lesjak appeared at the High Court in London this week to give evidence at HPE's $5bn fraud trial against former Autonomy CEO Mike Lynch and Autonomy's ex-CFO Sushovan Hussain, alleging the pair inflated their financial accounts to make the business look like it was worth the $11.7bn price tag HP paid. Both men deny any wrongdoing.

Roughly a year after the buyout, the US IT titan wrote down the value of Autonomy by $8.8bn, claiming the British firm had "misrepresented" its value. Lynch, Autonomy CEO at the time of the biz gobble, denies this. Meg Whitman was HP CEO during the aftermath of the ill-fated acquisition, the details of which were hammered out when Leo Apotheker led HP and Whitman was a board member.

HPE, formed after HP split in two, is now suing Lynch and Autonomy financial chief Sushovan Hussain at the High Court of England and Wales, seeking $5bn in damages regarding the debacle. Click here for more background information.

Lynch's barrister, Robert Miles QC, portrayed the atmosphere in the upper echelons of HP as toxic, asking HP's then-CFO Lesjak if her relations with Apotheker unravelled after she warned him against buying Software AG and Tibco as well as Autonomy.

"I pushed back and I told him we could not afford all three," Lesjak replied. "That we did not have the capital to do that. That we would either do a TIBCO and Software AG maybe – and I needed to do more work – or Autonomy."

Apotheker landed at HP as CEO in November 2010, and wanted to turn the US IT giant into a higher-margin software business. Lesjak had been interim CEO following the exit of Mark Hurd in August that year amid sex pest allegations.

As it was, Apotheker and the board agreed to pay a 68 per cent premium for Autonomy (on its market cap) – incidentally, Lesjak told the court Oracle had been in the frame as a potential bidder for the big data biz.

The CFO told Miles she had been shocked at the buy price agreed but played no part in the negotiations. She also said her "credibility" with Wall Street, "which is very important for a CFO", was at stake due to the inflated price tag and attempted to encourage Apotheker to "renegotiate" with Lynch and co.

Lesjak told Miles that HP's bankers had "underestimated" the impact of the buy on HP's share price, another reason she had reservations. She told the High Court she expressed these to the then-CEO but he wanted to move quickly on Autonomy.

In August 2011 – the month the buy was made public – Lesjak told Apotheker she wanted to talk to the board so that they "know my perspective" but was told it wasn't necessary.

She told the court she made the decision to speak up at 2am on the 16th of that month – the day of the board meeting – and confided only in her husband. She told the court: "I felt it was the wrong thing to do and I had never felt so strongly about something before. And I knew, or felt that if I spoke up, or when I spoke up, I would be fired."

During that meeting, Lesjak admitted, she'd sent a mail to HP chairman Ray Lane in which she revealed a PR person had described Apotheker as a "dead man walking".

Apotheker wanted to buy Autonomy and get shot of HP's PC business, including the closure of webOS. Lesjak said in the mail to Lane that she also tried to discuss this with the CEO but "he wasn't interested. We are reactive and act without good planning. There isn't financial discipline."

Miles asked if it was appropriate to send mails about the CEO during a meeting he was involved in. She replied it was "important for board members to know what's really going on". Miles also quoted an email from a lawyer representing HP that described a "poisonous internal environment".

This was not a characterisation the CFO agreed with.

Lesjak told Miles she suspected she'd be fired if she voiced her objection to the Autonomy deal, and when she spoke up claimed this was dismissed by Apotheker as simply one person's opinion. HP's general counsel agreed with her, however.

She admitted that she and Apotheker were "at odds" over the buy, and one afternoon in 2011, "Leo fired me," she told the court.

As it transpired, Lesjak stayed on – under new CEO Meg Whitman – while Apotheker exited in September 2011 with the stock market reacting badly to the Autonomy buy-price and the PC divestiture. Lesjak stayed with the business until it split, then left with the PC and printer divisions that were spun off into HP Inc in November 2015.

Lesjak retired in February this year.