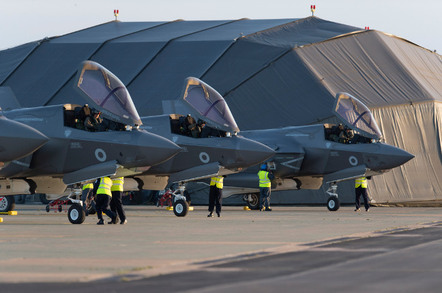 The F-35 fighter jet project has been hit by yet another set of controversies including a kerfuffle over US data-slurping, flight control problems and its stealth coating melting at supersonic speeds.

Once described by The Register as the ultimate vendor lock-in project, the F-35 is sold by Lockheed Martin as a package: not only do you buy the jets and their associated spares and training packages, you also buy its Autonomous Logistics Information System (ALIS).

ALIS is a spares and training management package. It tracks the state of the aeroplanes themselves, interfaces with onboard diagnostic systems to check system and component health, and orders spare parts as and when needed. As you can imagine, having access to ALIS gives you an instant and incredibly detailed picture of whether an F-35 squadron is capable of flying and fighting – or not.

Naturally, some countries buying the F-35 aren't happy about this. And US news outlet Defense News exclusively reported that not only are problems with ALIS still rolling on, years after they were first spotted and bug-reported, but a number of countries threatened to pull out altogether unless the US developed a product to stop critical data from being sent back to America.

The product, called Sovereign Data Management (SDM), acts in conceptual terms like a firewall and stops detailed mission planning data from being sent to the US. The report also stated that next year's planned release of ALIS, v3.6, is expected to have this filtering baked in.

The publication named Israel, Italy, Norway and the UK as users of SDM. It is neither likely nor credible that the UK would have threatened to pull out of the F-35, given the tens of billions of pounds spent building two new aircraft carriers that were specifically designed around the F-35B. In addition, billions more are being spent upgrading RAF airfields for the vertical takeoff F-35B used by the British armed forces.

The US Navy officer currently in charge of the F-35 project, Vice Admiral Mat Winter, told the publication: "I don't know where that ever came from, maybe from the politics, but there's nobody pulling [out]," he said. "No one ever said those words to me, and I see all of my partners on a regular basis."

Lockheed Martin is also facing a set of challenges that will look very familiar to anyone with experience of large-scale software integration projects, according to additional reporting by Defense News (and indeed, are spiralling on from woes we reported last year). Software engineers are reportedly needed to enter new spare parts into ALIS as they come into the supply chain. When, predictably, parts are missed or the data entered isn't quite right, everything starts – quite literally – falling apart, with the site reporting that "a part might be breaking down from heavy use, yet that part won't be flagged by ALIS as an at-risk piece".

Among other revelations from a trove of F-35 documents seen by the site is the snippet that flying at faster than Mach 1.2 can cause the aircraft's stealth coating to blister and fall off, as well as alarming control problems.

Earlier this year, a US watchdog warned that ALIS was harbouring a number of cybersecurity problems. ®