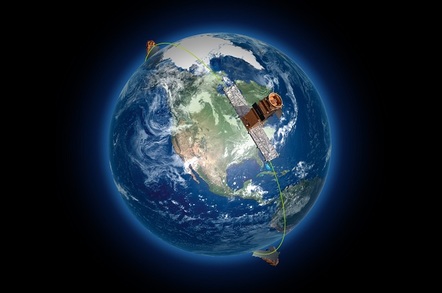 SpaceX nailed a second landing of a Falcon 9 first stage at its Vandenberg Landing Zone 4 today after punching through the Californian fog to send a trio of Canadian satellites into orbit.

The booster used to launch RADARSAT had previously seen service in Florida, sending the Crew Dragon demonstrator to the International Space Station before landing on a drone ship stationed in the Atlantic ocean.

The Falcon 9 launched at 14:17 UTC, the first stage burning for just over two minutes before separating from the second stage and performing a boostback burn to head back to Landing Zone 4 (LZ-4). The booster successfully landed just under eight minutes after lift-off.

The RADARSAT constellation, built by Maxar Technologies' MDA, is the third in Canada's sequence of Earth observation satellites. RADARSAT-1, launched in 1995 from Vandenberg on a Delta II, finally died in 2013 after exceeding its design life by over 12 years. RADARSAT-2 went up in 2007 and remains active.

The third mission, dubbed the RADARSAT Constellation Mission (RCM), ups the ante by sending three satellites up simultaneously. The new C-band Earth observation spacecraft are approximately half the size of their predecessors, measuring around 3.6m high, 1.1m wide and 1.7m deep. Each satellite weighs in at 1,430kg and enjoys a 6.98m-wide antenna.

Having a constellation means RCM will be able view any point over 90 per cent of the Earth's surface, except the South Pole, every 24 hours. While the satellites are expected to see usage for ecosystem monitoring, agriculture and disaster relief efforts, the inclusion of an Automated Identification System (AIS) for ships will also improve the tracking of vessels of interest.

Orbiting at an altitude of 600km, RCM is expected to last for seven years, although Canada will be hoping for the longevity of its predecessors.

Boffins at SpaceX now have less than two weeks until the third Falcon Heavy is sent skywards from the former Shuttle launchpad, LC39A, in Florida. On 24 June, Musk's Monster Missile launch will carry the US Air Force Space and Missile Systems Center's Space Test Program-2 (STP-2) among multiple payloads.

The side boosters are expected to land at Landing Zone 2 and Landing Zone 1, the latter swept clear of the remains of SpaceX's unfortunate Crew Dragon.

Getting the Crew Dragon up and running again is becoming increasingly important, and not just for NASA's commercial crew ambitions: Bigelow Space Operations is aiming to send as many as 16 people to the ISS over four launches. ®

Bigelow Space Operations has secured up to 4 dedicated @SpaceX launches to fly up to 16 people to the @Space_Station. @BigelowSpaceOps is committed. For more information visit: https://t.co/XVcWP3jFBC pic.twitter.com/43mtISckVj