Your rapid-fire guide to machine-learning bits and bytes 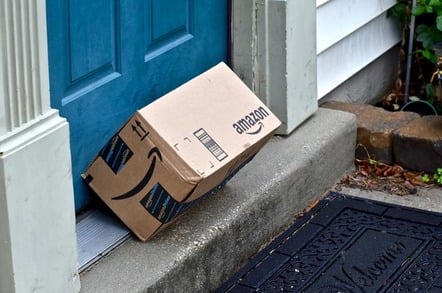 Roundup It's been a busy seven days in the world of AI, what with Facebook purloining a database of 3D objects to use in its AI projects, and boffins writing software to produce machine-learning models tiny enough to operate inside microcontrollers. But here's a round-up of news nuggets beyond what we've already covered.

Here's a video – sans package, we note – of one of them flying over some grassy fields.

The flying gizmo was presented on stage during Amazon's re:MARS, a conference on machine learning, automation, robotics and space. Its main body looks like a rectangular brick surrounded by six arms, each carrying rotor blades.

The whole thing is then surrounded by six strips to create a hexagonal barrier around the device.

"We've been hard at work building fully electric drones that can fly up to 15 miles and deliver packages under five pounds to customers in less than 30 minutes," Jeff Wilke, CEO of Amazon Worldwide Consumer, said.

"And, with the help of our world-class fulfilment and delivery network, we expect to scale Prime Air both quickly and efficiently, delivering packages via drone to customers within months."

The device comes packed with cameras to give the drone stereo vision and runs AI computer vision algorithms so it can fly, take off, and land safely, avoiding any obstacles like chimneys, people, or even animals.

Amazon's hope is that the Air service can ship small packages quicker than the standard two-day service for its Prime customers. The e-commerce giant also hopes that electric drones will halve the carbon footprint on its deliveries by 2030.

Since I started working at Vox, Steven Crowder has been making video after video "debunking" Strikethrough. Every single video has included repeated, overt attacks on my sexual orientation and ethnicity. Here's a sample: pic.twitter.com/UReCcQ2Elj

Maza has repeatedly flagged the videos up for violating YouTube's policy on harassment and cyberbullying, to no avail. Although YouTube acknowledged his complaints, it has decided to keep Crowder's content up on its site. It's not that surprising since YouTube is all about engagement, and Crowder pulls a lot of people in; he does have over 3.7 million subscribers after all.

I don’t know what to say.
@YouTube has decided not to punish Crowder, after he spent two years harassing me for being gay and Latino.

I don't know what to say. https://t.co/EFvWCNvPms

The second bombshell revealed that YouTube's algorithms that recommend videos based on what you've previously watched before are aiding pedophiles. An investigation by the New York Times reported the concern of some parents who'd unwittingly posted home videos of their children and found those videos suddenly gained hundreds and thousands of views.

In the event of all this mess, it decided that minors under the age of 13 will not be allowed to livestream themselves unless they're accompanied by an adult. Comments will also be disabled for videos depicting young children. And, Google's video platform has also dialed back its recommendation system for any clips featuring "minors in risky situations".

But that's not all. YouTube also announced that it is going to tackle hate. Only it's not the hate from Stephen Crowder. Instead, it's going after Nazi supremacy vids, and any bonkers conspiracies that deny any "well-documented violent events" ever took place. So, Holocaust deniers, take note, you are not welcome.

Ban facial recognition, Congress!: A letter drafted by the American Civil Liberties Union, a nonprofit based in New York, calling for the US House Oversight and Reform Committee to ban law enforcement using facial recognition, has been signed by over 60 different groups.

The Committee held a hearing on the issue at the end of May. Several experts called for a moratorium on facial recognition, and now other organisations ranging from advocates of the LGBT community to religious rights groups have stepped in to support the ACLU.

"Congress should put in place a moratorium on federal use or provision of assistance for the deployment of face recognition for immigration and law enforcement purposes until there can be a full debate about what, if any, uses should be permitted. We should not move forward," the letter read.

You can read it in full here. ®