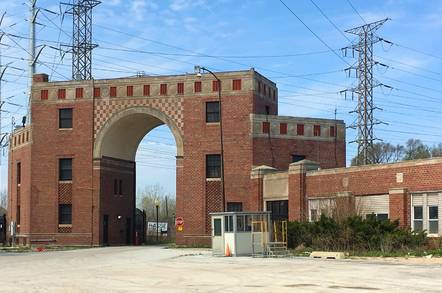 Digital Crossroads, the company converting an old coal-fired power station near Chicago into a giant colocation data centre, will use server heat to help agricultural efforts at the nearby Purdue Uni Northwest.

The campus will feature a system to recapture waste heat – which is usually simply vented into the atmosphere – and route it into purpose-built greenhouses to be used by Uni's students and staff in various schemes.

"This project is going to change how data centres operate and impact the environment, serving as a great example for other projects around the world," trilled Peter Feldman, CEO of Digital Crossroads.

Digital Crossroads has taken over the former State Line Generating Facility in Hammond, on the shores of Lake Michigan, and is spending $40m to turn it into a 105,000 square foot data centre.

The use of Lake Michigan water for cooling is also something the company said it is considering.

Eventually, the campus could grow to more than a million square feet – but that would require an investment of another $160m.

Digital Crossroads broke ground on the site in August 2018.

"Cleaning up a former coal plant involves tons of effort and regulation, and without such strong support from the city of Hammond and the state of Indiana it wouldn't have been possible," said Tom Dakich, data centre developer at Digital Crossroads.

The company added that the regional utility provider, Northwest Indiana Public Services Co, is planning to retire its remaining coal portfolio and replace it with wind and solar power generation – something that will enable the Crossroads campus to go fully renewable.

Other notable waste heat reuse projects include Yandex's data centre in Mäntsälä, Finland, which is supplying heat to 20,000 homes; Telia's 24MW data centre near Helsinki, once again Finland, which heats the nearby town of Espoo; Bahnhof in Sweden, which has three data centres plugged into local district heating networks; and Digiplex, which keeps 5,000 homes warm in Oslo.

The idea is rapidly gaining popularity, since it enables operators to cut cooling costs while providing an additional revenue source. Unfortunately, in order to reuse low-grade waste heat, data centres require a sizeable investment in equipment.

There are schemes emerging where heat pump costs are covered by the utility, and not the data centre operator: for example, Stockholm Data Parks, a region earmarked for data centre development, provides "cooling as a service", where it will shoulder the cost of the heat pumps in exchange for free heat, as long as the facility hosts at least 10MW of equipment. ®