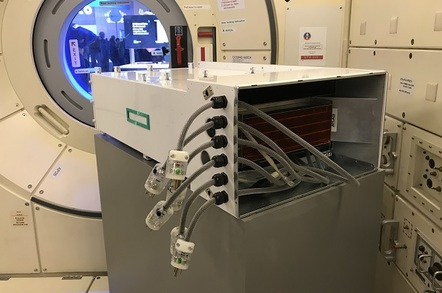 A prototype of the Spaceborne Computer in a mock-up of the ISS (pic: Hewlett Packard Enterprise)

While HP may be struggling to meet demand for its new idiot visors, HPE's Spaceborne Computer has returned to Earth after 615 days onboard the International Space Station.

Hewlett Packard Enterprise's baby, a box based on its Apollo 40-Class computer system (a two-socket Xeon affair usually found elsewhere at NASA), was flung into orbit back in 2017 as a demonstration of the first commercial off-the-shelf (COTS) computer system on the ISS.

We'll skip over the Lenovos, iPads, Surfaces and the odd Raspberry Pi also floating around up there. This, as HPE would say, is a supercomputer.

The machine was launched on 14 August 2017 on SpaceX's CRS-12 mission to the ISS. The plan had been to run the thing for a year to see how it would stand up to life in orbit onboard the ISS. A year or so, after all, is roughly how long a round trip to Mars could take.

Getting data to and from a vehicle heading to the red planet for processing on Earth could result in some dangerous lag as communication times lengthen. So, the theory went, why not take along your own supercomputer instead?

Shortly after a September power-up, the Spaceborne computer hit the 1 teraFLOPS mark in high-performance computing benchmarks.

It has also enjoyed its share of glitches, including shutting down when an ISS fire alarm was triggered and rebooting when an astronaut inadvertently hit a power reset button. "We said, 'Oh no, it will never wake up,' because pulling a plug on a Linux server is the worst thing you can do. But once everything was reconnected, we did a health check and it was back running," said Dr Mark Fernandez, HPE Spaceborne computer payload developer.

After a mission extension due to shuffling cargo manifests, the supercomputer was handed over to investigators conducting research on the orbiting lab. NASA Langley, for example, used the thing to test software aimed at guiding spacecraft through the re-entry and descent process down to the Earth's surface.

All good things must come to an end: the machine was unplugged by NASA 'naut Christina Koch and packed onto a SpaceX Dragon, which returned safely to Earth this week.

While HPE are justifiably proud that the Spaceborne Computer, with its resolutely non-space-hardened hardware survived its extended sojourn in orbit, despite enduring the forces of launch, cosmic rays and clumsy astronauts, credit must also be given to the machine's software, which had enjoyed a bit of hardening.

When radiation levels got high, the software lowered the system's power, slowing the speed to allow the system to continue to operate correctly in spite of the unusual environment.

It will therefore be of comfort for HP customers still waiting to get their hands on a Reverb headset to know that the wares of the company's Enterprise spinoff can survive 615 days in space and travel nearly 229 million miles, even if their own headwear seems unable to make it from factory to fanboy. ®