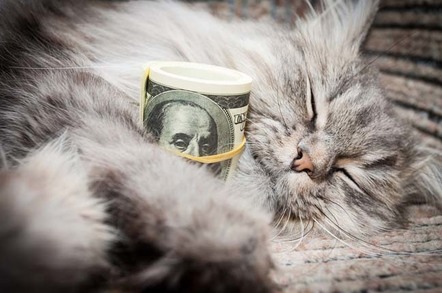 Microsoft got together with Oracle today to fling interoperability at users of Azure and the latter's less-loved Cloud.

The trading relationship is aimed at running workloads over both services. The dream has the likes of Analytics and AI in Azure connected to Oracle's Autonomous Database, plugging the gaps in each vendor's lineup.

It's a curious move on the part of the two giants: Microsoft has recently been working hard to shed its Great Satan image through open-source initiatives as well as embracing developers with the likes of the hugely popular Visual Studio Code, .NET Core and, of course, PowerShell.

Oracle? Big Red is perhaps a tad less eager to be cuddled. However, its cloud business has been less than stellar to date, trailing quite some way behind AWS, Azure and Google. The company has even had to suffer the indignity of a sueball lobbed at its execs, alleging the outfit was perhaps a little optimistic in its revenue forecasts.

CTO and co-founder of Big Red Larry Ellison sniffed at last year's OpenWorld that "first-generation" clouds were a bit rubbish, favouring the company's "second-generation" pitch, which we thought looked suspiciously like rebranded bare-metal servers. AI and machine learning, reckoned Ellison, would be used to monitor the wunder-cloud, before he got back to the AWS-kicking that is so often a feature in his tirades keynotes.

Certainly, Oracle's cloud business has not grown at anywhere near the rate of Microsoft's. In its results for Q3 of FY2018, Oracle had total cloud revenues at $1.6bn. On-prem revenues stood at $6.4bn for the quarter. Q3 of FY2019 is a little murkier, since the company has shunted "license support" in with Cloud Services to make a rosy looking $6.7bn, and combined cloud and on-prem licences to make $1.3bn. The net result is that things are pretty flat. The figures actually drop when one considers a fall in hardware revenues.

Big Red is naturally very keen to persuade its customers that the cloud is the way to go.

Oracle, therefore, has much to gain to from buddying up with one of the cloud big boys, provided it isn't AWS (we suspect Larry would eat his own yacht should that happen).

Microsoft, on the other hand, hasn't been shy in betting big on the cloud, and will be eyeing Oracle's substantial book of database customers. Making enterprise tech such as Oracle Autonomous Database (running on Exadata infrastructure in Oracle Cloud) accessible to Azure customers (as well its own platform available to the Big Red ocean of Oracle users) is certainly appealing to senior management.

Microsoft coined the phrase "lift-and-improve migrations" to describe the connectivity, through network and identity interoperability.

The direct network connectivity has hooked up Ashburn (North America) with Azure US East today, and the gang plans to add additional regions in the future.

Once linked, customers happy to pony up the necessary cash (and you can bet those licences are going to be carefully checked) will be able to enjoy a unified single sign-on experience and automated user provisioning to manage resources across Azure and Oracle Cloud. Those willing to jump on the preview train can also use Azure Active Directory as an identity provider for Oracle apps.

Deployment of those Oracle apps (such as E-Business Suite, PeopleSoft and Oracle Retail) will also be supported on Azure, with database services provided by Oracle Cloud. Although you can still run Oracle Database yourself on Azure, Oracle Linux and so on.

After all, if you're having problems locking customers into one vendor, two is better than nothing. ®