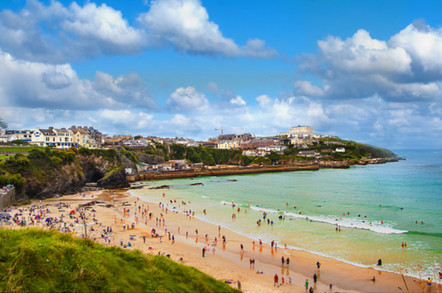 The UK government is flinging more cash at Blighty's embryonic launch capabilities, with another £20m up for grabs.

Unlike recent rounds, the funds are aimed squarely at getting US-based Virgin Orbit and its Cosmic Girl carrier 747 flying from Cornwall Airport Newquay (Spaceport Cornwall).

The cash will come from Cornwall Council, which is depositing £12m into the pot, the UK Space Agency, which is ponying up £7.85m, and £500,000 from the Cornwall and Isles of Scilly Local Enterprise Partnership to send the money pile just over the £20m mark. For its part, Virgin Orbit is investing £2.5m in the project.

LauncherOne, which is to be dropped from the repurposed 747 at around 35,000ft, is capable of delivering between 300 and 500kg of payload to orbit. Virgin plans to build 24 of the things annually at its Southern California facility.

While there is no hard and fast date for when Virgin Orbit might send its LauncherOne system into the skies off the Cornish coast other than "the early 2020s", the outfit expects to attempt a maiden US launch this year.

Virgin Orbit can fly from pretty much anywhere there is an airstrip with a runway big enough for a Boeing 747 and infrastructure to support the launch. The outfit added the Pacific island of Guam to its launch sites in April, with plans for a first launch in 2020.

Flying from Cornwall occasionally would help create 150 jobs. The small satellite market targeted by Virgin Orbit could be worth up to £3.9bn by 2030.

Those worrying about the notoriously picky US technology export restrictions will be reassured to know that the US State Department has already approved a Technical Assistance Agreement (TAA) allowing detailed technical discussions and strategic planning to commence. There will, alas, be no US rocket fun without the necessary paperwork in place, no matter how chummy the US and UK administrations might appear to be at the moment.

While the funding aims to get Virgin Orbit's horizontal shenanigans up and running, Scottish rocket botherers Skyrora, who like things a little more vertical, were quick to offer their congratulations.

Huge congratulations to our partners at @SpaceCornwall for securing funding from @spacegovuk to enable horizontal space launch with @virgin_orbit from Cornwall! 🚀 https://t.co/DFsdj6E5bW

Of course, that funding isn't a sure thing just yet. The UK Space Agency clarified to The Register that it would have to submit the business case for the cash to the UK Treasury for approval, something that would happen later this year.

It goes without saying that the government has a busy back-end of the year ahead of it.

As for where the money will come from, the UK Space Agency told us that it will be scooped from the £50m spaceflight programme pot. £31.5m has already been allocated for the Sutherland spaceport, Orbex and Lockheed Martin, £2m is going into the horizontal launcher proposal fund and £350,000 is for range control studies. ®

40% of exports to France won't be a problem, right?